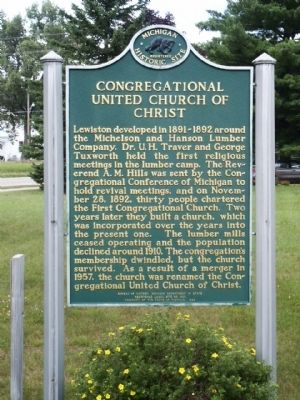 Lewiston developed in 1891-1892 around the Michelson and Hanson Lumber Company. Dr. U.H. Traver and George Tuxworth held the first religious meetings in the lumber camp. The Reverend A.M. Hills was sent by the Congregational Conference of Michigan to hold revival meetings, and on November 28, 1892, thirty people chartered the First Congregational Church. Two years later they built a church, which was incorporated over the years into the present one. The lumber mills ceased operating and the population declined around 1910. The congregation's membership dwindled, but the church survived. As a result of a merger in 1957, the church was renamed the Congregational United Church of Christ.

Topics and series. This historical marker is listed in these topic lists: Churches & Religion • Industry & Commerce • Settlements & Settlers. In addition, it is included in the Michigan Historical Commission series list. A significant historical month for this entry is November 1906. 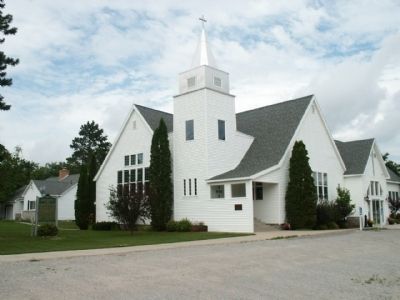 Click or scan to see
this page online
N, 84° 18.306′ W. Marker is in Lewiston, Michigan, in Montmorency County. Marker is at the intersection of Kneeland Street and Woodfield Avenue, on the right when traveling north on Kneeland Street. Congregational United Church of Christ is 2 blocks (0.2 miles) north of County Road 612. Touch for map. Marker is at or near this postal address: 3191 Kneeland Street, Lewiston MI 49756, United States of America. Touch for directions. 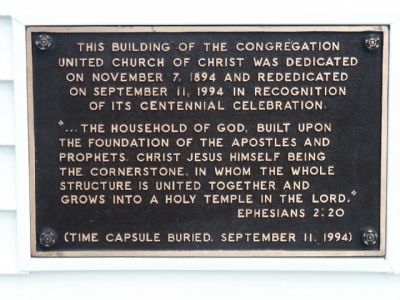