Site of What Cheer House 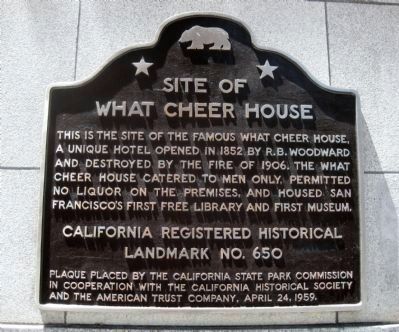 This is the site of the famous What Cheer House, a unique hotel opened in 1852 by R. B. Woodward and destroyed by the fire of 1906. The What Cheer House catered to men only, permitted no liquor on the premises, and housed San Francisco's first free library and first museum.

Plaque placed by the California State Park Commission in cooperation with the California Historical Society and the American Trust Company, April 24, 1959.

Topics and series. This historical marker is listed in these topic lists: Industry & Commerce • Notable Buildings. In addition, it is included in the California Historical Landmarks series list. A significant historical date for this entry is April 24, 1838. 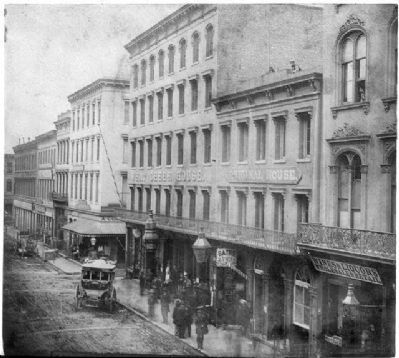 Photographed By Lawrence and Houseworth (Publisher), 1866
2. What Cheer House (1866)
This depiction of the What Cheer House (center of photo, to the left of the Original House) is half of a stereographic print, published by Lawrence and Houseworth as part of their Gems of California Scenery series. Image is courtesy of the Library of Congress, Prints and Photographs Division.

Click or scan to see
this page online
Street on Leidesdorff Street. Touch for map. Marker is in this post office area: San Francisco CA 94104, United States of America. Touch for directions.

Also see . . .  William Tecumseh Sherman (1820 - 1891). In their treatment of General William Tecumseh Sherman, the Virtual Museum of San Francisco notes in passing a famous visitor to the What Cheer House, U.S. Grant: "...Capt. Ulysses Grant resigned his commission in the army, July 31, 1854, at Fort Humboldt, north of San Francisco, because his commanding officer said his weakness for liquor was cause for court martial or resignation. Capt. Grant then came to San Francisco and lived at the What Cheer House, a temperance hotel, just six blocks from Sherman’s bank." (Submitted on July 20, 2010.) 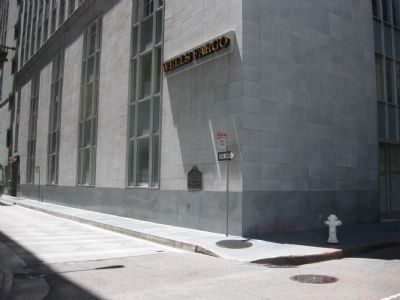