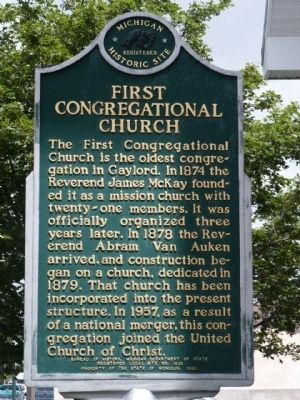 The First Congregational Church is the oldest congregation in Gaylord. In 1874 the Reverend James McKay founded it as a mission church with twenty-one members. It was officially organized three years later. In 1878 the Reverend Abram Van Auken arrived, and construction began on a church, dedicated in 1879. That church has been incorporated into the present structure. In 1957, as a result of a national merger, this congregation joined the United Church of Christ.

Topics and series. This historical marker is listed in these topic lists: Churches & Religion • Notable Buildings. In addition, it is included in the Michigan Historical Commission series list. A significant historical year for this entry is 1874. 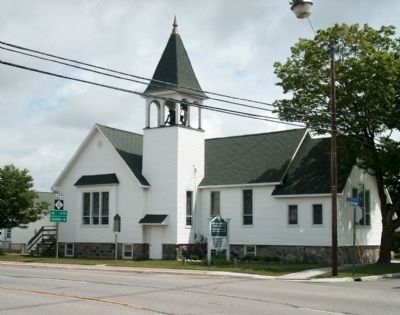 Click or scan to see
this page online
and church are located two blocks south of Main Street (State Highway 32). Touch for map. Marker is at or near this postal address: 218 West Second Street, Gaylord MI 49735, United States of America. Touch for directions.