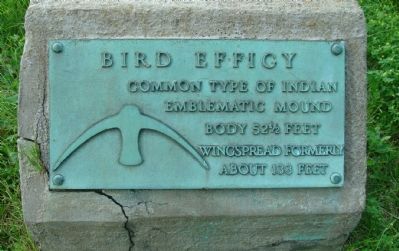 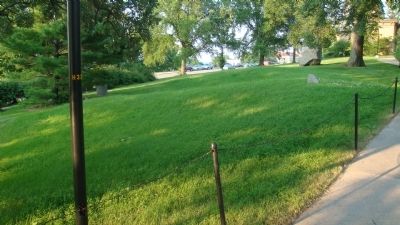 Photographed By William J. Toman, June 24, 2010
2. Bird Effigy and Marker
With Chamberlin Rock and Washburn Observatory in the background.

Click or scan to see
this page online
According to a 1996 survey by Robert A. Birmingham and Katherine H. Rankin entitled Native American Mounds in Madison and Dane County, "Directly to the west of the University of Wisconsin observatory, near the crest of Observatory Hill, are a bird mound and a turtle effigy. The wings of the bird mound, originally spanning 133 feet, have both been truncated.

The turtle mound was unusual for its two tails (extending toward the lake) but one is barely discernable and the other is gone. The plaque for the turtle mound incorrectly states that the mound was built by the Winnebago about 500 years ago. We now know that the mounds are much older, although the Winnebago did use these mounds for their burials and religious ceremonies.

Two other mounds once belonged to this group: a linear and a panther. These mounds, which were north of the turtle mound, were destroyed by the University sometime after 1922. Just south of this group, where Agriculture Hall is now, was another group of several conicals destroyed in 1902 when Ag Hall was constructed." 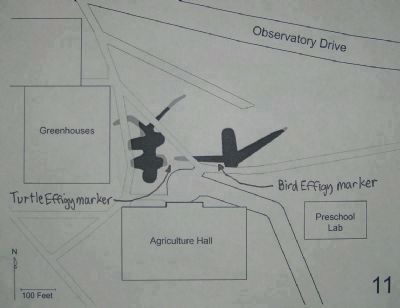