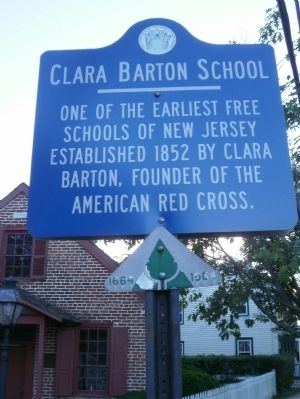 One of the earliest free schools of New Jersey established 1852 by Clara Barton, founder of the American Red Cross.

Topics and series. This historical marker is listed in these topic lists: Charity & Public Work • Education • Women. In addition, it is included in the Clara Barton series list. A significant historical year for this entry is 1852.

Other nearby markers. At least 8 other markers are within walking distance of this marker. Clara Barton (here, next to this marker); Borden's Towne (about 700 feet away, measured in a direct line); Richard Watson Gilder House (about 700 feet away); Dedicated to School No. 2 (about 800 feet away); Tower Clock (approx. 0.3 miles away); The Telephone made its Bordentown Debut in 1882 (approx. 0.3 miles away); Bordentown Female College 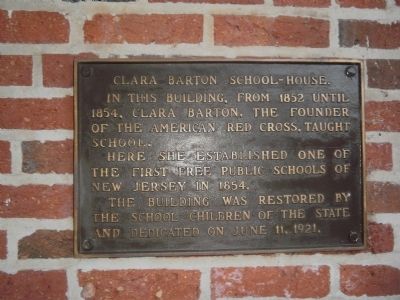 Photographed By Deb Hartshorn, July 26, 2010
2. Clara Barton School-House Marker
In this building, from 1852 until 1854, Clara Barton, the founder of the American Red Cross, taught school. Here she established one of the first free public schools of New Jersey in 1854. The building was restored by the school children of the state and dedicated on June 11, 1921.

Also see . . .
1. Clara Barton. New Jersey Women's History website entry:
Clara Barton (1821-1912) was born in North Oxford, Massachusetts, where she taught school as a young woman. In 1852 she traveled to Bordentown where she received the reluctant approval of the town school committee to open a free public school where she would teach. School attendance grew under her direction to include 600 by the end of the first year. (Submitted on July 26, 2010, by Deb Hartshorn of Burlington County, New Jersey.) 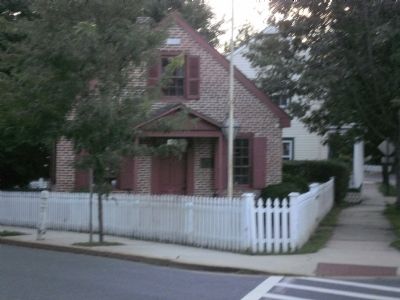