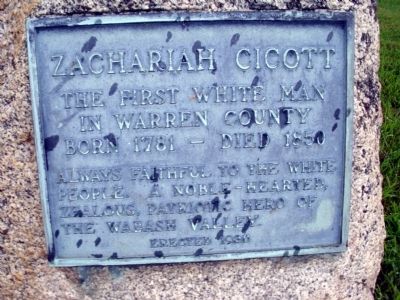 By Courtesy:: Trevor Searcy, July 31, 2010
1. Zachariah Cicott Marker
Inscription.
Zachariah Cicott. The First White Man in Warren County. Always faithful to the white people. A noble - hearted, zealous, patriotic hero of the Wabash Valley. . This historical marker was erected in 1930. It is Near Independence in Warren County Indiana

Always faithful to the white people. A noble - hearted, zealous, patriotic hero of the Wabash Valley.

Location. 40° 20.843′ N, 87° 10.66′ W. Marker is near Independence, Indiana, in Warren County. Marker is on North Independence Pine Village Road north of County Road E 175 N, on the left when traveling north. Located in the West section of the Independence Cemetery by the flag pole. Touch for map. Marker is in this post office area: Williamsport IN 47993, United States of America. Touch for directions. 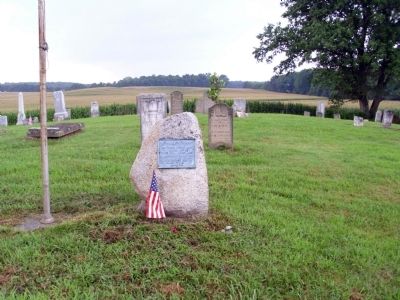 By Courtesy:: Trevor Searcy, July 31, 2010
2. Full View - - Zachariah Cicott Marker
Courtesy of "warrenadvantage.com":: ""Cicott was instrumental as a scout and guide for William Henry Harrison during the Battle of Tippecanoe in 1811, which was fought a few miles further northeast near Lafayette. Harrison's army marched through Warren County and several soldiers are buried here. Harrison would later be elected president of the US with the memorable slogan "Tippecanoe and Tyler too!" "" 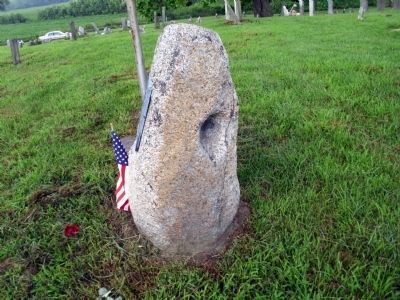 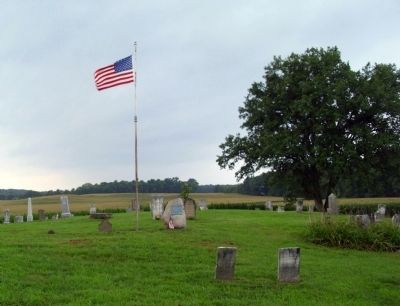