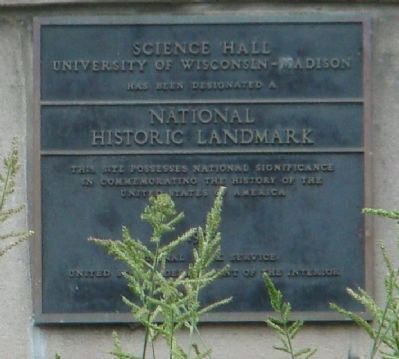 Photographed By William J. Toman, July 25, 2010
1. Science Hall Marker
Inscription.
Science Hall. University of Wisconsin - Madison.
Science Hall University of Wisconsin - Madison has been designated a National Historic Landmark This site possesses national significance in commemorating the history of the United States of America.. . This historical marker was erected in 1993 by National Park Service, United States Department of the Interior. It is in Madison in Dane County Wisconsin

Science Hall
University of Wisconsin - Madison
has been designated a
National Historic Landmark
This site possesses national significance
in commemorating the history of the
United States of America.

Topics and series. This historical marker is listed in this topic list: Education. In addition, it is included in the National Historic Landmarks, and the Wisconsin, Madison Landmarks Commission series lists. 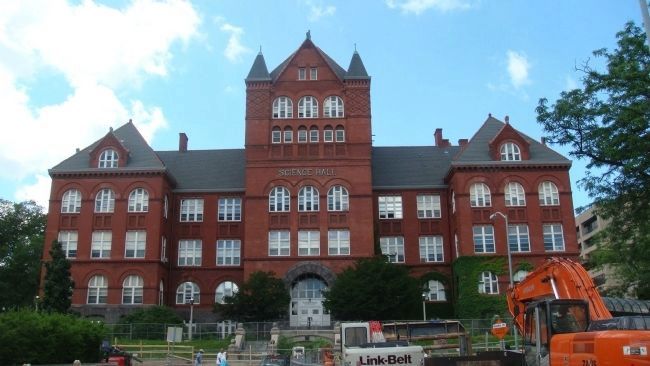 Photographed By William J. Toman, July 25, 2010
2. Science Hall Marker
The marker is on the arch under the center doors, and the "striking leaded glass transom window" mentioned in the Madison Landmarks Commission marker is above those doors. See detail photo below.

Regarding Science Hall. According to the Madison Landmarks Commission, which designated Science Hall as a landmark (no. 170) in 2007, it was designed by architect Henry C Koch, altered by architect Allan Conover, and built 1885-1887. Moreover, "Science Hall is a three-story u-shaped Romanesque Revival structure with a gable roof, featuring a rock-faced coursed rhyolite ashlar raised basement and walls of red-pressed brick in common bond. The building is enriched with ornamental brickwork and belt courses of rhyolite and glazed red terra cotta.

"Science Hall is associated with Charles R. Van Hise (1857-1918), who was the first geologist in the Nation to apply microscopic lithology to the extensive study of crystalline rocks, and to use those results in the formulation of geological principles. 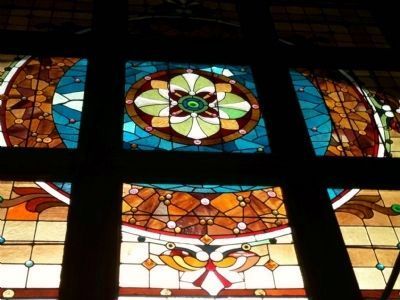 Photographed By William J. Toman, April 13, 2012
3. Science Hall Leaded Glass Window
This is an interior view of the "striking leaded glass transom window" mentioned in the Madison Landmarks Commission marker.
Van Hise's emphasis on the quantitative application of physical and chemical laws to geological problems was one of his greatest contributions to the science of geology. His influential 1904 monograph, A Treatise on Metamorphism, moved geology out of the science of classification and into formulating principles. As a teacher, Van Hise earned a reputation for training geologists who matched his own high standards in scientific research.

"In addition, it was in Science Hall that Wisconsin Physics Professors Earle M. Terry and Edward Bennett, along with their students, carried out research that contributed to the development of radio from wireless telegraphy. In the basement of Science Hall, Terry and his students [developed] the beginnings of telegraphic station 9XM, which eventually became WHA radio, the oldest continuously operating radio station in the nation."

According to David V. Mollenhoff, Madison: A History of the Formative Years (2nd ed.), p. 220, Frank Lloyd Wright worked on Science Hall, before he became an architect, while employed by Allan Conover. Also, "Science Hall was one of the first buildings in the United States to use steel for structural framing and may be the oldest extant building in the country with this feature. The use of steel was no accident; Conover was keenly interested in new construction technologies, and in the 1880s 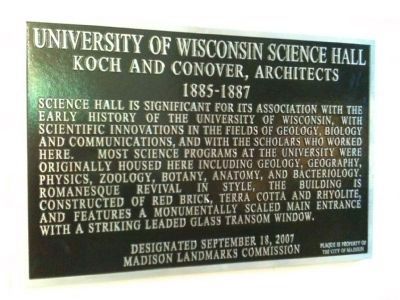 Photographed By William J. Toman, April 13, 2012
4. Science Hall Marker
This Madison Landmarks Commission marker is at the top of the stairs inside the front entrance of Science Hall.
steel was at the cutting edge. Wright especially appreciated Conover's architectural ingenuity and savored the opportunity to see his mentor's mind at work. These experiences allowed Wright to examine the work of other architects and to see plans transformed into buildings. A final benefit of his employment with Conover was the engineer's practice of delegating remarkably responsible work to young subordinates. For example, Conover sent Wright scampering to the top of Science Hall on steel girders to replace a clip. No wonder Wright later said that of all his employers, it was from Conover that he 'learned the most.'" 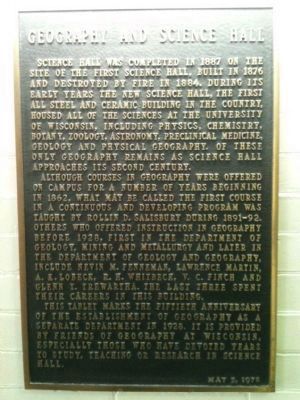 Photographed By William J. Toman, April 13, 2012
5. Geography and Science Hall Marker
This marker is at the top of the stairs inside the front entrance of Science Hall. 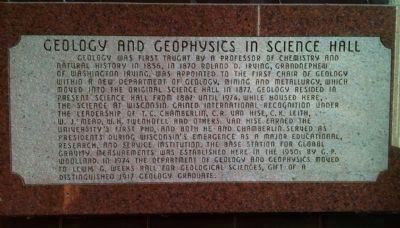 Photographed By William J. Toman, April 13, 2012
6. Geology and Geophysics in Science Hall Marker
This marker is to the right just inside the front entrance of Science Hall, and reads as follows: