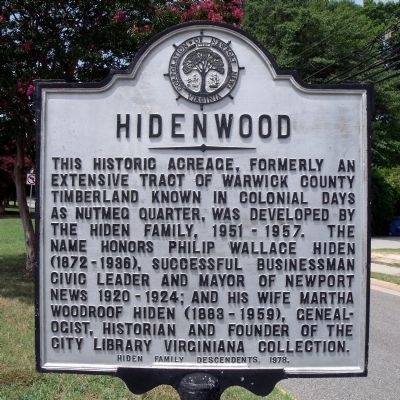 By Bernard Fisher, July 31, 2010
1. Hidenwood Marker
Inscription.
Hidenwood. . This historic acreage, formerly an extensive tract of Warwick County timberland known in colonial days as Nutmeg Quarter, was developed by the Hiden family, 1951 - 1957. The name honors Philip Wallace Hiden (1872-1936), successful businessman, civic leader and mayor of Newport News 1920 - 1924; and his wife Martha Woodroof Hiden (1883-1959), genealogist, historian and founder of the city library Virginiana Collection. . This historical marker was erected in 1978 by Hiden Family Descedents. It is in Newport News Virginia

Topics and series. This historical marker is listed in these topic lists: Arts, Letters, Music • Colonial Era. In addition, it is included in the Virginia, Corporation of Newport News series list. A significant historical year for this entry is 1951.

Other nearby markers. At least 8 other markers are within one mile of this marker, measured as the crow flies. First Baptist Church Morrison (approx. ¼ mile away); Captain Christopher Newport (approx. 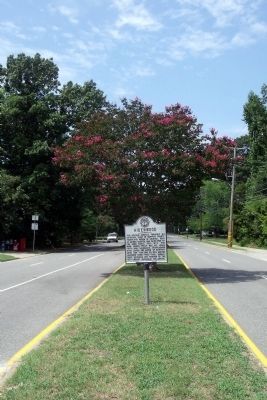