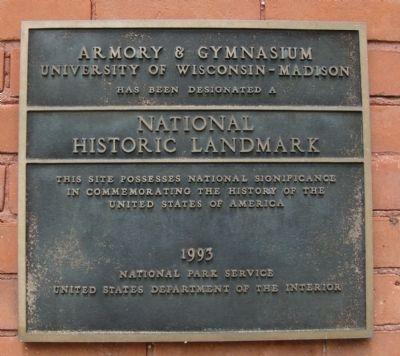 By William J. Toman, August 4, 2010
1. Armory & Gymnasium Marker
Inscription.
Armory and Gymnasium. University of Wisconsin - Madison.
Armory and Gymnasium University of Wisconsin - Madison has been designated a National Historic Landmark This site possesses national significance in commemorating the history of the United States of America.. . This historical marker was erected in 1993 by National Park Service, United States Department of the Interior. It is in Madison in Dane County Wisconsin

Armory & Gymnasium
University of Wisconsin - Madison
has been designated a
National Historic Landmark
This site possesses national significance
in commemorating the history of the
United States of America.

Topics and series. This historical marker is listed in these topic lists: Education • Sports. In addition, it is included in the National Historic Landmarks, and the Wisconsin, Madison Landmarks Commission series lists.

Other nearby markers. At least 8 other markers are within walking distance of this marker. A Living Room for Campus (about 300 feet away, measured in a direct line); Born in Madison, the Wisconsin Idea changed the nation (about 400 feet away); State Historical Society 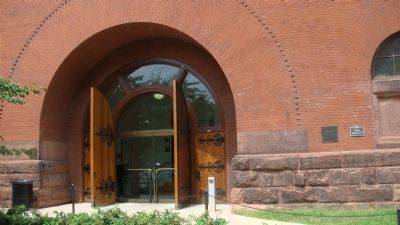 By William J. Toman, August 4, 2010
2. Armory & Gymnasium Marker
Front entrance to the "Red Gym" with markers on the right.

Regarding Armory & Gymnasium. According to the Madison Landmarks Commission, which designated the University of Wisconsin Armory and Gymnasium as a landmark (no. 169) in 2007, "The UW Armory and Gymnasium [designed by architects Allan Conover and Lew Porter and built 1892-1894] is a significant and outstanding example of its building type. The 'castellated medieval fortress' variation of the Romanesque Revival marks it unquestionably as an armory, while the interior spaces and large open spans made it a state-of-the-art nineteenth century gymnasium. The Armory features a rusticated coursed sandstone ashlar foundation, and load-bearing brick walls in common bond with sandstone trim. Distinguishing features include stepped gables, turrets and towers with corbelled and crenellated battlements, and broad arched entryways on the 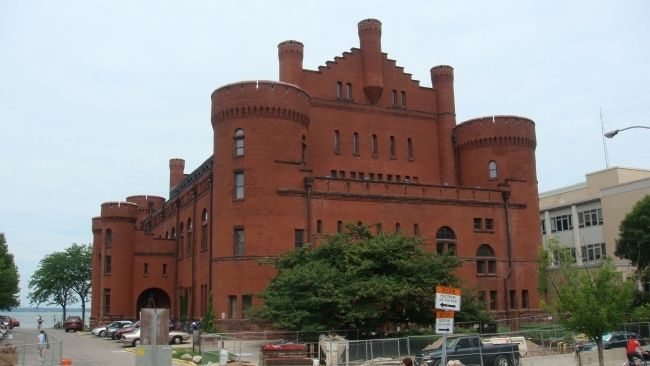 "The UW Armory was the site of the 1904 Wisconsin Republican Convention, a seminal event in the history of the Progressive Movement. At this convention, Robert M. La Follette's Progressives defeated the Stalwarts for control of the Wisconsin Republican Party. Widespread favorable publicity launched La Follette on the national scene. The controversy and legal suit engendered by the 'Gymnasium Convention' and La Follette's subsequent vindication by the Supreme Court of Wisconsin led the Progressives to victory that November, giving them a majority in the state legislature the following year. This allowed the enactment of substantial reforms, many of which were subsequently adopted by many states across the Nation." 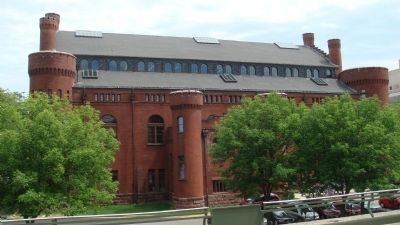 By William J. Toman, August 4, 2010
4. Armory & Gymnasium
View from a Memorial Union balcony on the west 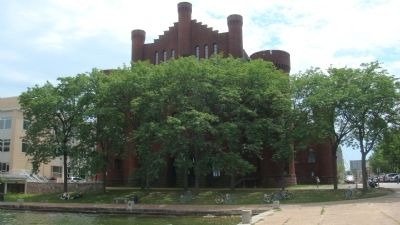 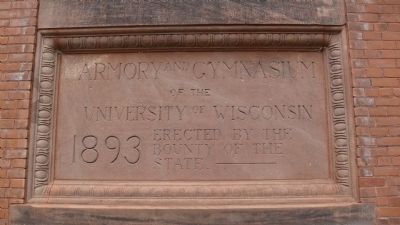 By William J. Toman, August 4, 2010
6. Armory & Gymnasium Dedication
Dedication on front of "Red Gym": "Armory and Gymnasium of the University of Wisconsin, 1893, erected by the bounty of the State." 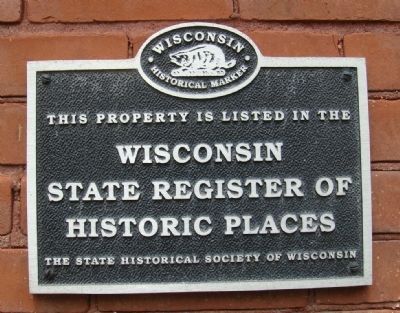 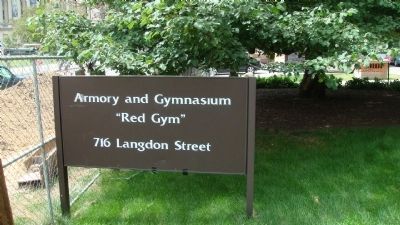 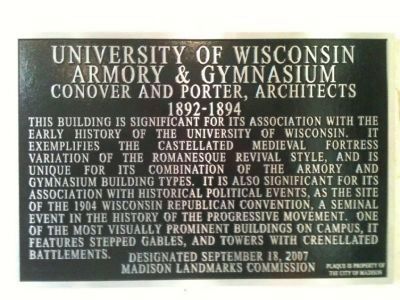 By William J. Toman, April 13, 2012
9. University of Wisconsin Armory & Gymnasium Marker
This Madison Landmarks Commission marker is in the lobby just inside the front door of the "Red Gym," and reads as follows:

This building is significant for its association with the early history of the University of Wisconsin. It exemplifies the castellated medieval fortress variation of the Romanesque Revival style, and is unique for its combination of the armory and gymnasium building types. It is also significant for its association with historical political events, as the site of the 1904 Wisconsin Republican Convention, a seminal event in the history of the Progressive Movement. One of the most visually prominent buildings on campus, it features stepped gables, and towers with crenellated battlements.