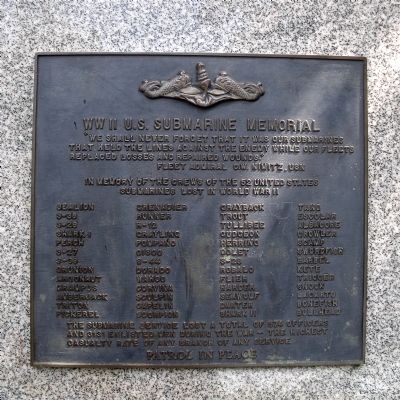 "We shall never forget that it was our submarines that held the lines against the enemy while our fleets replaced losses and repaired wounds."
Fleet Admiral C.W. Nimitz, USN

Topics and series. This memorial is listed in these topic lists: War, World II • Waterways & Vessels. In addition, it is included in the Still On Patrol series list. 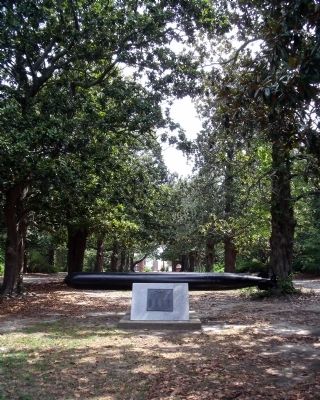 Click or scan to see
this page online
37° 1.241′ N, 76° 27.228′ W. Marker is in Newport News, Virginia. Memorial can be reached from Kawana Circle, 0.1 miles west of Biggins Circle, on the right when traveling west. This memorial is located adjacent to the Virginia War Museum in Huntington Park. Touch for map. Marker is at or near this postal address: 9285 Warwick Boulevard, Newport News VA 23607, United States of America. Touch for directions. 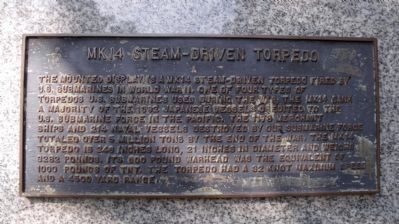 Photographed By Bernard Fisher, July 31, 2010
3. MK14 Steam-Driven Torpedo
The mounted display is a MK14 steam-driven torpedo fired by U.S. submarines in World War II. One of four types of torpedoes U.S. submarines used during the war, the MK14 sank a majority of the 1392 Japanese vessels credited to the U.S. Submarine Force in the Pacific. The 1179 merchant ships and 214 naval vessels destroyed by our submarine force totaled over 5 million tons by the end of the war. The MK14 torpedo is 246 inches long, 21 inches in diameter and weighs 3282 pounds. Its 600 pound warhead was the equivalent of 1000 pounds of TNT. The torpedo had a 32 knot maximum speed and a 4500 yard range. 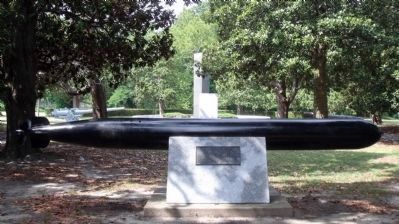