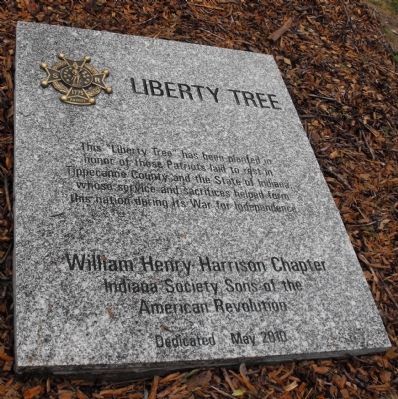 Photographed By George Frantz, May 22, 2010
1. Liberty Tree Marker
Inscription.
Liberty Tree. . This "Liberty Tree" has been planted in honor of those Patriots laid to rest in Tippecanoe County and the State of Indiana whose service and sacrifices helped form this nation during its War for Independence . This historical marker was erected in 2010 by Wm Henry Harrison Chapter, Indiana Society Sons of the American Revolution. It is in West Lafayette in Tippecanoe County Indiana

Topics and series. This historical marker is listed in these topic lists: Patriots & Patriotism • War, US Revolutionary. In addition, it is included in the Sons of the American Revolution series list.

Location. 40° 24.425′ N, 86° 57.838′ W. Marker is in West Lafayette, Indiana, in Tippecanoe County. Marker can be reached from South River Road, on the left when traveling west. Placed at Fort Ouiantenon. Touch for map. Marker is in this post office area: West Lafayette IN 47906, United States of America. Touch for directions.

Editor’s want-list for this marker. Distant photo of marker and tree. • Can you help?
Share this page.