The Partnership Continues into the 21st Century... 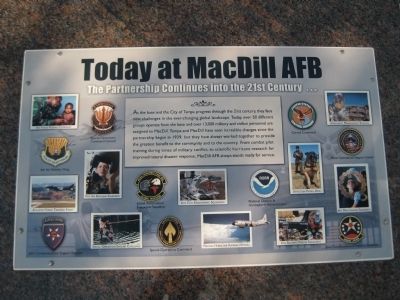 As the base and the City of Tampa progress through the 21st century, they face new challenges in the ever-changing global landscape. Today, over 50 different groups operate from the base and over 13,000 military and civilian personnel are assigned to MacDill. Tampa and MacDill have seen incredible changes since the partnership began in 1939, but they have always worked together to provide the greatest benefit to the community and to the country. From combat pilot training during times of military conflict, to scientific hurricane research for improved natural disaster response, MacDill AFB always stands ready for service. 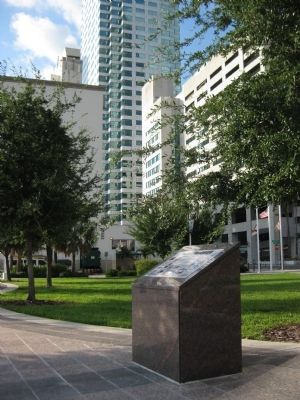 Topics. This historical marker is listed in these topic lists: Air & Space • Military. A significant historical year for this entry is 1939.

Location. 27° 56.712′ N, 82° 27.534′ W. Marker is in Tampa, Florida, in Hillsborough County. Marker can be reached from North Ashley Drive north of East Whiting Street, on the left when traveling north. The marker is installed at MacDill Park on the Riverwalk, in downtown Tampa. Touch for map. Marker is at or near this postal address: 100 North Ashley Drive, Tampa FL 33602, United States of America. Touch for directions.

More about this marker. The marker is one of several located in the park. It is along Tampa's Riverwalk, facing the Hillsborough River.

Related markers. Click here for a list of markers that are related to this marker. To discover how MacDill Air Force Base came to be and 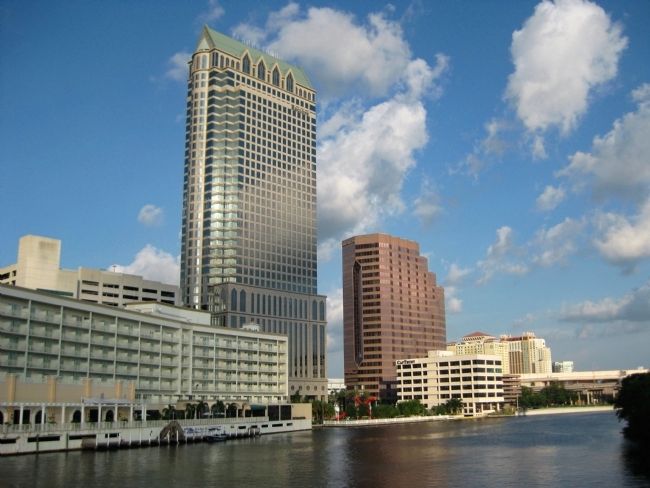 Photographed By AGS Media, July 30, 2010
3. The Hillsborough River and MacDill Park on the Riverwalk
The park (center) where the marker is located is set along the river at the foot of Tampa's tallest building, 100 North Tampa.
its roles through the decades, study each marker in the order shown.