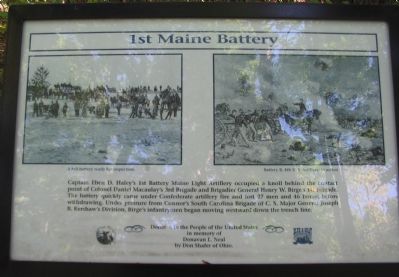 Donated to the People of the United States
in memory of
Donavan L. Neal
by Don Shafer of Ohio

Location. 39° 0.789′ N, 78° 18.675′ W. Marker is near Middletown, Virginia, in Frederick County. Marker can be reached from Valley Pike (U.S. 11), on the right when traveling south. Located along the walking trail of the XIX Corps Earthworks, preserved by the Cedar Creek Battlefield 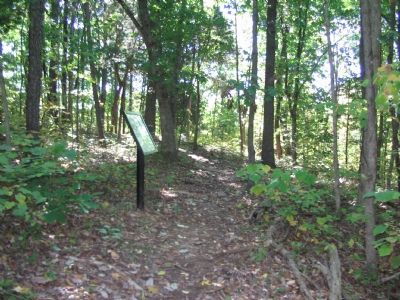 By Craig Swain, September 29, 2007
2. 1st Maine Battery Trail Stop
Much of the ground here was open field at the time of the battle.

Click or scan to see
this page online
Foundation. Touch for map. Marker is in this post office area: Middletown VA 22645, United States of America. Touch for directions.

More about this marker. On the left side of the marker is a photo of "A full battery ready for inspection." On the right side is a drawing of "Battery B, 4th U.S. Artillery in action."

Regarding 1st Maine Battery. The Cedar Creek battlefield is interpreted by several markers. See the Battle of Cedar Creek Virtual Tour by Markers link below.

Also see . . .
1. Cedar Creek Battlefield Foundation. The XIX Corps Earthworks and surrounding ground have been preserved through the efforts of the Foundation. (Submitted on November 9, 2007, by Craig Swain of Leesburg, Virginia.)

2. Battle of Cedar Creek Staff Ride. The trail extends from tour stop four on the Center of Military History staff ride of the battle. (Submitted on November 9, 2007, by Craig Swain of Leesburg, Virginia.)

3. Battle of Cedar Creek Summary. The action here is discussed as phase four of the National Parks Service summary of the battle. (Submitted on November 9, 2007, by Craig Swain of Leesburg, Virginia.)

4. Battle of Cedar Creek Virtual Tour by Markers. The related markers here follow a tour of the Cedar Creek Battlefield, October 19, 1864. (Submitted on December 8, 2007, by Craig Swain of Leesburg, Virginia.)