First Train Robbery in The West 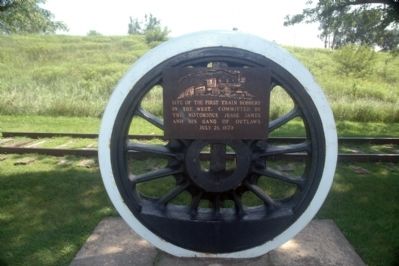 Site of the first train robbery in the west. Committed by the notorious Jesse James and his gang of outlaws July 21, 1873

Topics and series. This historical marker is listed in this topic list: Railroads & Streetcars. In addition, it is included in the Chicago Rock Island & Pacific Railway, and the Jesse James series lists. A significant historical date for this entry is July 21, 1859.

Regarding First Train Robbery in The West.
The Great Train Robbery
Jesse James and his notorious gang of outlaws staged the west’s first robbery of a moving train the evening of July 21, 1873, a mile and half west of Adair.
Early in July the gang had learned that $75,000 in gold from the Cheyenne region was to come through Adair on the recently built main line of the Chicago, Rock Island & Pacific Railroad.
Jesse sent his brother, 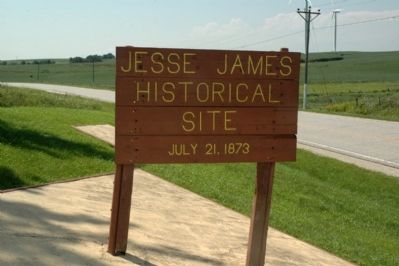 Click or scan to see
this page online
Frank James, and Cole Younger to Omaha to learn when the gold shipment was to reach them. Jesse, Jim and Tom Younger, Clell Miller and Bill Caldwell remained camped in the Adair area.
Finally Frank James and Cole Younger got their tip that the gold shipment was on its way east and they brought the report to Jesse, who had made plans for the train robbery. The afternoon of the robbery (July 21, 1873) the bandits called at the section house and obtained some pies and other food from Mrs. Robert Grant, wife of the section foreman.
In the meantime, the bandits broke into a handcar house, stole a spike-bar and hammer with which they pried off a fishplate connecting two rails and pulled out the spikes. This was on a curve of the railroad track west of Adair near the Turkey Creek bridge on old US No. 6 Highway (now County Road G30).
A rope was tied on the west end of the disconnected north rail. The rope was passed under the south rail and led to a hole they had cut in the bank in which to hide.
When the train came along, the rail was jerked out of place and the engine plunged into the ditch and toppled over on its side. Engineer John Rafferty of Des Moines was killed, the fireman, Dennis Foley died of his injuries and several passengers were injured.
Two members of the gang, believed to have been Jesse and Frank James, climbed into the express car and forced John 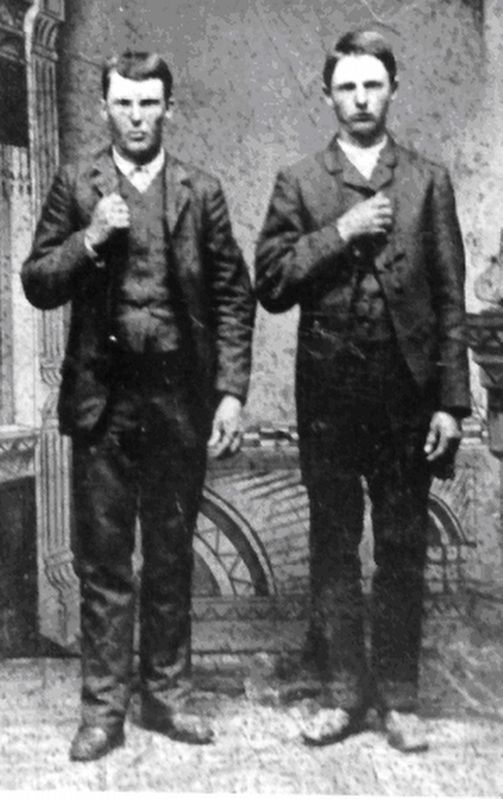 By unknown photographer, via Wikipedia Commons, 1872
3. Jesse and Frank James
Burgess, the guard, to open the safe. In it they found only $2,000 in currency — the gold shipment had been delayed. They collected only about $3,000 including the currency and loot taken from the passengers, in the world's first robbery of a moving train.
Levi Clay, employed by the railroad in Adair, which was then not quite a year old, walked to Casey where the alarm was sent by a telegrapher to Des Moines and Omaha. and soon the news was spread all over the nation A train loaded with armed men left Council Bluffs for Adair and dropped small detachments of men along the route where saddled horses were waiting.
The trail of the outlaws was traced into Missouri where they split up and were sheltered by friends. Later the governor of Missouri offered a $10,000 reward for the capture of Jesse James, dead or alive
On April 3, I882, the reward reportedly proved too tempting for Bob Ford a new member of the James gang and he shot and killed Jesse in the James home in St Joseph, Missouri.
A locomotive wheel which bears a plaque with the inscription "Site of the first train robbery in the west, committed by the notorious Jesse James and his gang of outlaws July 21, 1873 was erected by the Rock Island Railroad in 1964.

Posted on bulletin board at marker site 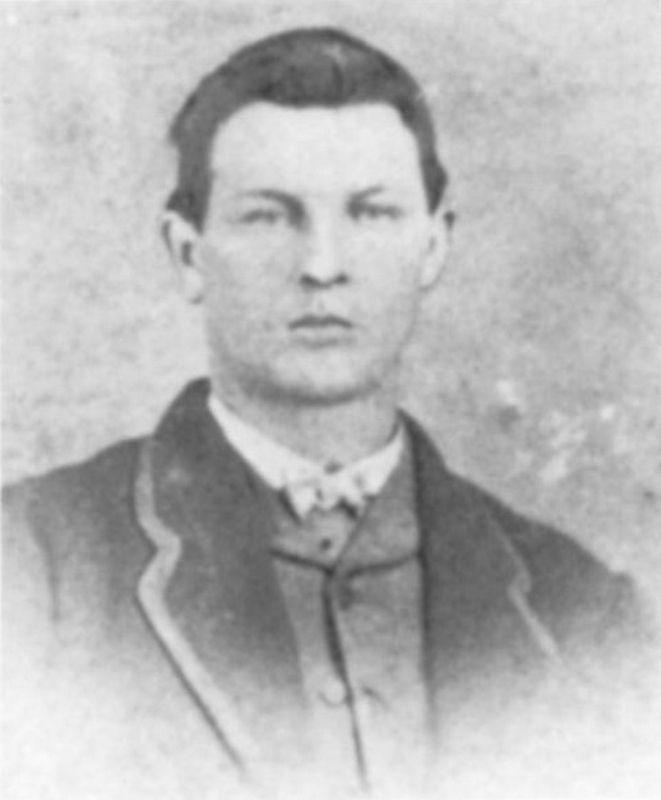 By unknown photographer via Wikipedia Commons
4. James Hardin "Jim" Younger
. “Jesse James is mistakenly thought to have completed the first successful train robbery in the American West when on July 21, 1873 the James-Younger Gang took US $3,000 from a Rock Island Railroad train after derailing it southwest of the town of Adair, Iowa. However, the first peacetime train robbery in the United States actually occurred on October 6, 1866, when robbers boarded the Ohio & Mississippi train shortly after it left Seymour, Indiana.” (Submitted on July 21, 2018.)