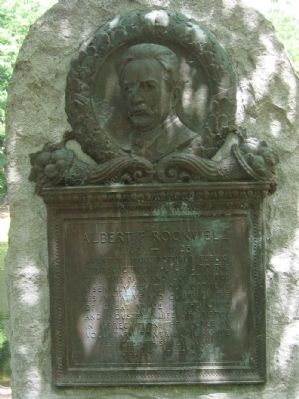 Photographed By Michael Herrick, July 31, 2010
1. Albert F. Rockwell Marker
Inscription.
Albert F. Rockwell. .
Albert F. Rockwell 1862 – 1925 Inventor, manufacturer, public- spirited citizen. He gave to the city this park and contributed liberally to its development. His initiave and counsel were of great value in the civic and industrial life of Bristol. In appreciation, the people by voluntary contribution have erected this memorial. Bristol, Connecticut 1926. . This historical marker was erected in 1926 by People of Bristol. It is in Bristol in Hartford County Connecticut

Albert F. Rockwell
1862 – 1925
Inventor, manufacturer, public-
spirited citizen. He gave to the
city this park and contributed
liberally to its development.
His initiave and counsel were
of great value in the civic
and industrial life of Bristol.
In appreciation, the people by
voluntary contribution have
erected this memorial.
Bristol, Connecticut 1926

Erected 1926 by People of Bristol.

Topics. This historical marker is listed in these topic lists: Charity & Public Work • Industry & Commerce. A significant historical year for this entry is 1862.

Location. 41° 40.506′ N, 72° 57.406′ W. Marker is in Bristol, Connecticut, in Hartford County. Marker is at the intersection of Jacob Street and Tulip Street, on the right when traveling west on Jacob Street. Located in Rockwell Park. Touch for map. Marker is in this post office area: Bristol CT 06010, United States of America. Touch for directions.

Other nearby markers. At least 8 other markers are within walking distance of this marker. John Christopher Mack (about 300 feet away, measured in a direct line); Forever Honored Forever Mourned (approx. ¼ mile away); Bristol Civil War Memorial 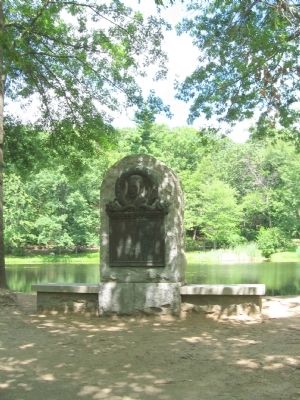 Regarding Albert F. Rockwell. Albert F. Rockwell founded the New Departure Manufacturing Company in 1890, making bicycle coaster brakes. It later became a major manufacturer of ball bearings.
New Departure produced automobiles from 1908 to 1911. Models were the Houpt-Rockwell Touring Car and Raceabout, and the Rockwell Public Service Cab. These were used by the Connecticut Cab Co. which became the Yellow Taxicab Co. operating in several major cities including New York and Washington, D.C. Rockwell was a director and major stockholder.
In 1913, Rockwell was ousted from New Departure and became president of Bristol Brass.
In 1916 he and became president of Marlin Arms Corporation, which he reorganized into Marlin-Rockwell Corporation. During World War I, the Marlin-Rockwell Corporation manufactured Colt-designed machine 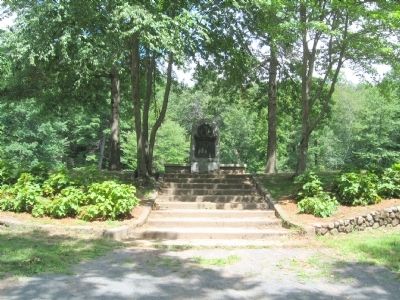 Photographed By Michael Herrick, July 31, 2010
3. Albert F. Rockwell Marker
guns and Browning automatic rifles. Marlin-Rockwell designed and manufactured synchronizing mechanisms for fighter plane machine guns and other components for the war effort. Marlin-Rockwell machine guns were highly regarded by Army pilots and generals.
Albert F. Rockwell was a generous contributor to the Bristol community. He donated the land forming this park and the land for Memorial Boulevard Park (see the related marker). He supported many civic efforts with his money and time. He died on February 17, 1925 and was interred in Bristol's West Cemetery. The cemetery was part of his estate that he donated to the city for a park.

(Source: Marlin Firearms: A History of the Guns and the Company That Made Them, by William S. Brophy) 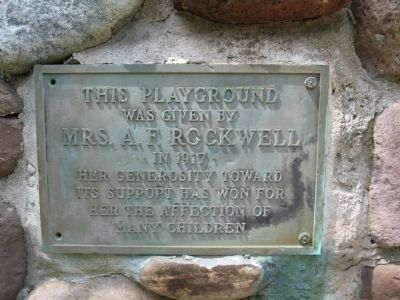 Photographed By Michael Herrick, July 31, 2010
4. Marker at the Playground Entrance
This Playground
Was Given By
Mrs. A. F. Rockwell
In 1917
Her Generosity Toward
Its Support Has Won For
Her The Affection Of
Many Children 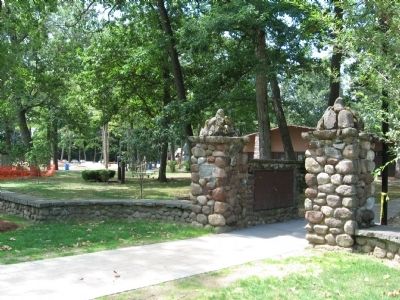