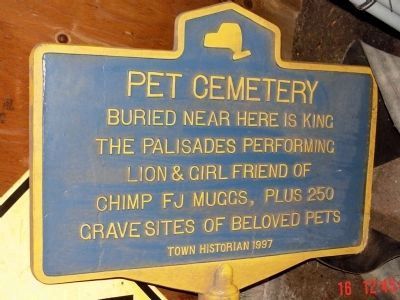 Erected 1997 by Town of Chester Historian.

More about this marker. Marker was never erected, reportedly due to the objections of a nearby property owner.

Click or scan to see
this page online
Earl and Ethel Purtle trained the lion "King" to ride and perform in a "drome." They were a fixture at Palisade Amusement Park across the Hudson River from New York City for many years.

Chimpanzee "J. Fred Muggs" was the mascot on the "Today" television show in the 1950s. His "girlfriend" was Phoebe B. Beebe.