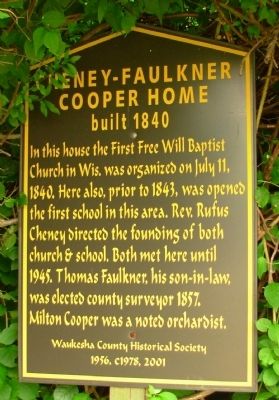 By Paul F, August 13, 2010
1. Cheney-Faulkner Cooper Home Marker
Inscription.
Cheney-Faulkner Cooper Home. Built 1840. In this house the First Free Will Baptist Church in Wis. was organized on July 11, 1840. Here also, prior to 1843, was opened the first school in this area. Rev. Rufus Cheney directed the founding of both church and school. Both met here until 1945. Thomas Faulkner, his son-in-law, was elected county surveyor 1857. Milton Cooper was a noted orchardist. . This historical marker was erected in 1956 by Waukesha County Historical Society. It is in New Berlin in Waukesha County Wisconsin

In this house the First Free Will Baptist Church in Wis. was organized on July 11, 1840. Here also, prior to 1843, was opened the first school in this area. Rev. Rufus Cheney directed the founding of both church and school. Both met here until 1945. Thomas Faulkner, his son-in-law, was elected county surveyor 1857. Milton Cooper was a noted orchardist.

Other nearby markers. At least 8 other markers are within 3 miles of this marker, measured as the crow flies. Childhood Home of Wisconsin Governor Julius P. Heil (1876-1949) (approx. 0.3 miles away); Freewill Baptist Church (approx. 0.4 miles away); Linnie Lac (approx. ¾ mile away); Park Arthur (approx. 1.4 miles away); Janesville Plank Road Tollgate 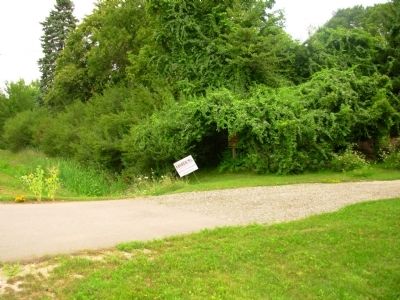 Regarding Cheney-Faulkner Cooper Home. Home is located well off the road and is a private residence.

Additional comments.
1. Additional History about the Cheney-Faulkner Cooper Home
This home in New Berlin, in an area once called Prospect Hill, was built in 1840 by Reverend Rufus Cheney who arrived from Antrium, N.H. in 1837.

Walnut trees on the property were sawed nearby in Linnie Lac at Wedges Sawmill and used for building.

The house was quite large for that time with a cellar, attic, two big rooms with fireplaces back to back, a small kitchen, a bake oven built into the chimney, and three bedrooms.

There was an Indian reservation across the road, so the Native Americans often came for trading or handouts. Since at this time there was no church for the reverend to serve, he set up the first Freewill Baptist Church in his parlor on July 11,1840. The school for Prospect 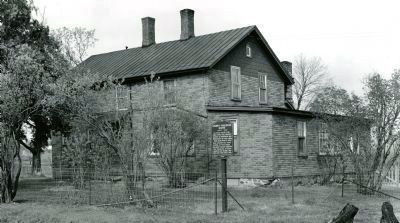 By Linda Hansen, circa 1958
3. Cheney-Faulkner Cooper Home as it looked in 1958
Note the original, 1956 Historical Marker.
Hill also began here.

Thomas Faulkner married Rufus Cheney's daughter, Nancy. A financial arrangement was made between Thomas and the Cheneys, to have both families live there until Cheney's' death. Then it would belong to the Faulkners.

Thomas was a farmer, surveyor, teacher, and cabinet maker.

During the years Thomas and his family lived here, he started an orchard on 39 acres and it grew to 450 trees by the time the property was sold.

In 119 years only two families lived in this house. Governor Julius Heil, who lived nearby, stopped by often.

In 1927 Milton and Neoda Cooper bought the farm from Rufus Faulkner and raised their six children. The house was damaged by fire in 1964.

In 1997 the house was declared a City of New Berlin Historical landmark. It was cited twice by the U.S. Department of Interiors Historic Sites Survey. You can still see this house standing on Racine Avenue just below Prospect Hill.
— Submitted August 10, 2012, by Linda Hansen of Waukesha, Wisconsin.