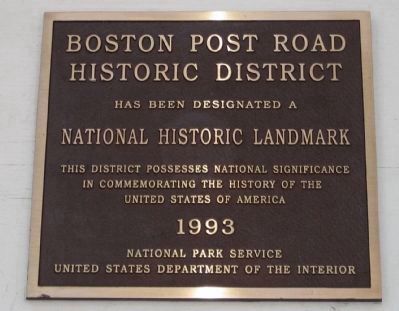 By Suzanne Clary, January 25, 2008
1. Boston Post Road Historic District Plaque
Inscription.
Boston Post Road Historic District. . Has been designated a National Historic Landmark. This District possesses national significance in commemorating the history of the United States of America. 1993. National Park Service United States Department of the Interior. . This historical marker was erected in 1993 by National Park Service. It is in Rye in Westchester County New York

Has been designated a National Historic Landmark. This District possesses national significance in commemorating the history of the United States of America. 1993. National Park Service United States Department of the Interior.

Topics and series. This historical marker is listed in these topic lists: Notable Places • Patriots & Patriotism. In addition, it is included in the National Historic Landmarks series list.

Other nearby markers. At least 8 other markers are within 2 miles of this marker, measured as the crow flies. Boston Post Road (about 400 feet away, measured in a direct line); Rye Meeting House (approx. 0.9 miles away); The Purdy Burying Ground (approx. 1.1 miles away); Playland Amusement Park (approx. 1½ miles away); Sept. 23, 1661 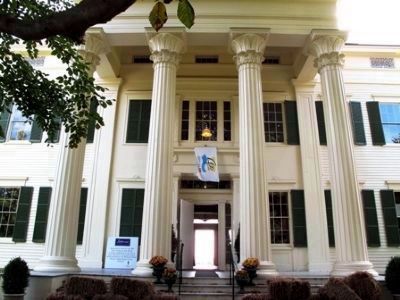 More about this marker. Marker is Located within the Visitors Reception area of the 1838 Peter Augustus Jay Mansion which is open Sundays 2-5 pm and during the week by appointment (marker is inside for security reasons - had been stolen previously)

Regarding Boston Post Road Historic District. Westchester is fortunate to be the home of the National Historic Landmark Boston Post Road Historic District which was added to the National Register of Historic Places in 1982 (NR#82001275) through efforts of members of the Jay Coalition (precursor to the Jay Heritage Center); the nomination which identified this peerless group of gems was assembled and written by JHC founder, Karen Kennedy, Austin O'Brien and Wes Haynes.


This impressive 286 acre expanse includes 5 properties: The Jay Property (23 acres), Whitby Castle (110 acres), The Jay Cemetery (3 acres), Lounsbury (13 acres), and Marshlands Conservancy (137 acres). These extraordinary windows into our American past--and this unique district-- received National Historic Landmark status in 1993 because of the site's association with New York State's Founding Father, John Jay , who grew up and is buried within the district, and because of the architectural stature of the 3 pre-civil 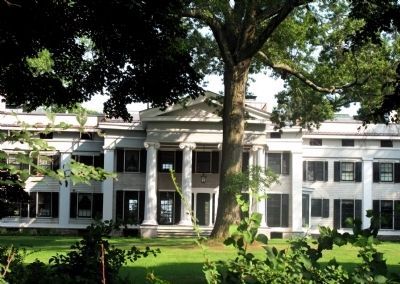 By Suzanne Clary, July 5, 2010
3. Lounsbury
war estates --including their associated buildings and landscapes. There are fewer than 2500 NHLs in the nation and 262 of them (slightly over 10%) are in New York State.


This entire 286 acre American treasure has been further recognized as an archaeologically sensitive zone by New York State's Historic Preservation Office and by the National Register of Historic Places because of its cultural affiliations which include Middle Woodland, Late Woodland, Late Archaic and periods of historic significance of 3000-4999 BC, 1000-2999 BC, 1499-1000 AD, 1749-1500 AD, 1825-1849, and 1850-1874.


As one walks along the Post Road, also known as the King's Highway, Route 1, you can see the dramatic change in architectural styles between 1838 and 1854 just before the Civil War.


Starting at 210 Boston Post Road, the centerpiece of the Boston Post Road District and the Jay Property is the Greek Revival 1838 Peter Augustus Jay Mansion which may have been designed by John Jay's son and was inspired by the pattern books of Minard Lafever. Now home to the Jay Heritage Center, the mansion is surrounded by the Jay Property which has 3 owners and stewards: the Jay Heritage Center, New York State Parks and Westchester County.


Lounsbury is next door to the Jay Mansion and it is a Classical Revival structure with Ionic columns. It is privately owned. 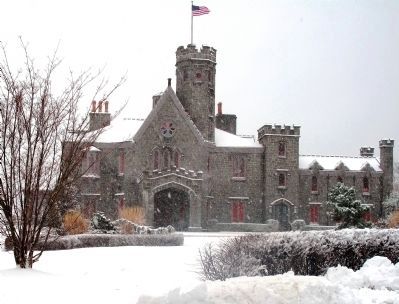 By Suzanne Clary, January 17, 2010
4. Whitby Castle
is Whitby Castle, designed by Alexander Jackson Davis, the same architect who designed Lyndhurst. Now home to the Rye Golf Club, Whitby is wholly owned by the City of Rye.