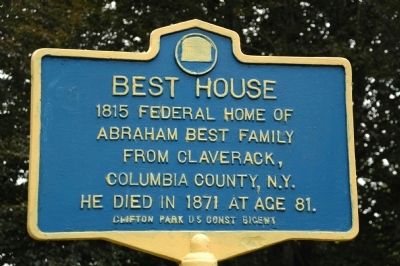 Topics. This historical marker is listed in this topic list: Notable Buildings. A significant historical year for this entry is 1815. 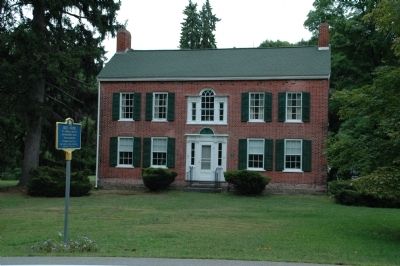 Click or scan to see
this page online
The Abraham Best House is an outstanding example of Federal architecture built by Abraham and Harriet Best of Claverack, Columbia County. The house retains all its original carved woodwork and fireplace mantels. Abraham Best was born January 21, 1790 in Columbia Co., NY.

Here is an interesting excerpt about Abraham Best taken from the following book:

The Bench and Bar of Saratoga County, or Reminiscences of the Judiciary, and Scenes in the Court Room, From the Organization of the County to the Present Time By Enos R. Mann, Attorney-At-Law Ballston, NY Waterbury & Inman 1876

"Some men never appear to be happy unless entangled in the meshes of a suit at law. Such an one appears to have been the late Abraham Best of Clifton Park. He had as strong a constitutional aversion to paying taxes as do the noted Smith sisters of Glastonbury, Connecticut. In the year 1863, Adam V. V. Pearse was collector of the school district in Clifton Park in which Best resided. A tax warrant having been placed in his hands on which a certain amount was set opposite the name of Best, he called upon him for the amount at his residence. After making some querulous objections, he invited Pearse into his house and took him to an upper room. He there left him and went out, locking the door after him. After waiting in vain for quite a time for his return, the collector raised 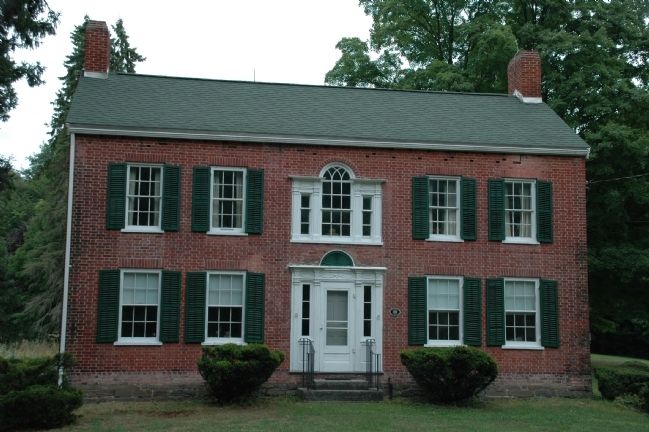 Photographed By Howard C. Ohlhous, August 21, 2010
3. Best House - Clifton Park, New York
a window and jumped to the ground. He brought a civil action for an assault against Best which was tried at the January term, 1864, before Justice Platt Potter. George G. Scott was plaintiff's counsel, and J. Summerfield Enos appeared in behalf of the defendant. A judgment was entered against Best for $50 and costs. Soon after this, he was adjudged a lunatic on the petition of his relatives, and subsequently he died at the Marshall Infirmary in Troy. 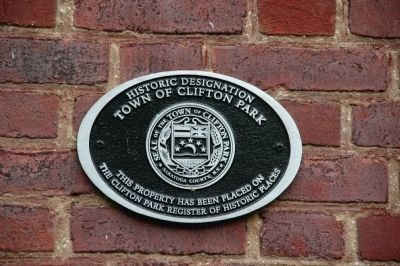