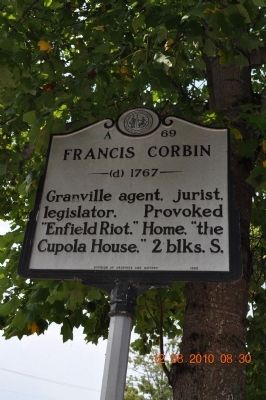 Erected 1982 by Division of Archives and History. (Marker Number A-69.)

Topics and series. This historical marker is listed in these topic lists: Colonial Era • Government & Politics. In addition, it is included in the North Carolina Division of Archives and History series list. 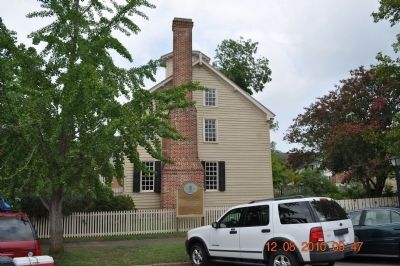 Also see . . .
1. Francis Corbin. Stopping Points entry:
Most of Francis Corbin’s life before his arrival in America remains a mystery. It is assumed that he was born in England, possibly London, in the early 1700s. (Submitted on August 23, 2010, by Sandra Hughes Tidwell of Killen, Alabama, USA.)

3. Enfield, North Carolina. Town History:
An event in Enfield's history which probably helped to spark American independence was the "Enfield Riot," one of the earliest political actions against British tyranny. In January, 1759, a group of backwoodsmen seized Lord Granville's land saint, Francis Corbin, in Edenton and brought him to Enfield. (Submitted on August 24, 2010, by Sandra Hughes Tidwell of Killen, Alabama, USA.)

Additional commentary.
1.
Having moved from England to Edenton, NC, when I married a native of that town - the first colonial 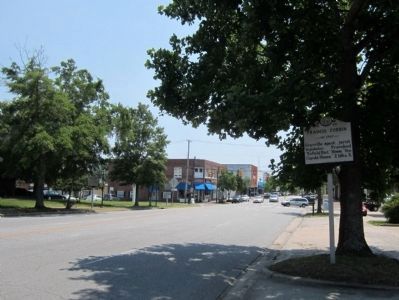 Photographed By Bernard Fisher, June 28, 2012
3. Francis Corbin Marker
capital of North Carolina - I had always been surprised that nobody there knew anything about Francis Corbin's life or family from before he became, in 1749, agent for Earl Granville, the English nobleman who then owned a swathe across the north of NC that was about one-eighth of the total area of the Carolinas. Submitted on August 23, 2010, by Sandra Hughes Tidwell of Killen, Alabama, USA.
— Submitted March 7, 2021. 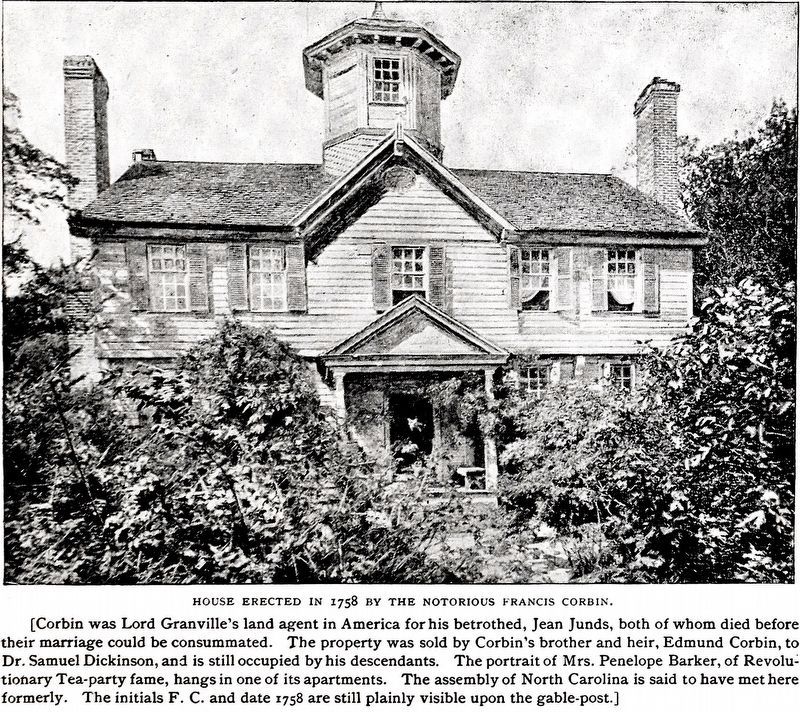 Internet Archive
4. House Erected In 1758 by The Notorious Francis Corbin.
Corbin was Lord Granville's land agent in America for his betrothed, Jean Junds, both of whom died before their marriage could be consummated. The property was sold by Corbin's brother and heir, Edmund Corbin, to Dr. Samuel Dickinson, and is still occupied by his descendants. The portrait of Mrs. Penelope Barker, of Revolutionary Tea-party fame, hangs in one of its apartments. The assembly of North Carolina is said to have met here formerly. The initials F. C. and date 1758 are still plainly visible upon the gable-post.
From The Magazine of American History, Vol. XXVIII, No. 6, December 1892.
Credits. This page was last revised on June 24, 2021. It was originally submitted on August 23, 2010, by Sandra Hughes Tidwell of Killen, Alabama, USA. This page has been viewed 810 times since then and 36 times this year. Photos:   1, 2. submitted on August 23, 2010, by Sandra Hughes Tidwell of Killen, Alabama, USA.   3. submitted on July 2, 2012, by Bernard Fisher of Richmond, Virginia.   4. submitted on October 25, 2020, by Allen C. Browne of Silver Spring, Maryland. • Bill Pfingsten was the editor who published this page.
Share this page.