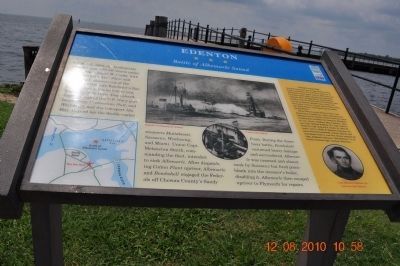 On May 5, 1864, the Confederate ironclad ram CSS Albemarle under Commander James W. Cooke, with gunboats Cotton Plant and Bombshell, steamed out of the Roanoke River into Bachelor's Bay and Albemarle Sound before you, bound for New Bern. Dead ahead, however, waited the U.S. Navy gunboats Ceres, Commodore Hull, and Whitehead, and the transport Ida May. Beyond lay the double-ended steamers Mattabesett, Sassacus, Wyalusing, and Miami. Union Capt. Melancton Smith, commanding the fleet, intended to sink Albemarle. After dispatching Cotton Plant upriver, Albemarle and Bombshell engaged the Federals off Chowan County's Sandy Point. During the three-hour battle, Bombshell sustained heavy damage and surrendered. Albemarle was rammed and almost sunk by Sassacus but fired point-blank into the steamer's boiler, disabling it. Albemarle then escaped upriver to Plymouth for repairs.

Click or scan to see
this page online
Albemarle sound began early in 1862, and many loyal men, both white and African American, enlisted. They included slaves and freedmen familiar with the Sound and its tributaries, who served as gunners, powder boys, cooks, and mechanics. Chowan County natives Henry Johnson, John Paxton, and Daniel Spruel sailed aboard Miami.

Topics and series. This historical marker is listed in this topic list: War, US Civil. In addition, it is included in the North Carolina Civil War Trails series list. A significant historical month for this entry is May 1778.

Location. 36° 3.347′ N, 76° 36.59′ W. Marker is in Edenton, North Carolina, in Chowan County. Marker is on Broad Street, on the right when traveling south. Located on the waterfront at the end of Broad Street. Touch for map. Marker is in this post office area: Edenton NC 27932, United States of America. Touch for directions.

Also see . . .
1. Wikipedia CSS Albemarle. CSS Albemarle was an ironclad ram of the Confederate Navy (and later the second Albemarle of the United States Navy), named for a town and a sound in North Carolina and a county in Virginia. All three locations were named for General George Monck, the first Duke of Albemarle and one of the original Carolina Lords Proprietors. (Submitted on August 24, 2010, by Sandra Hughes Tidwell of Killen, Alabama, USA.)

2. Wikipedia Melancton Smith 1810-1893. Smith was senior naval officer of a small fleet in Albemarle Sound where he attacked the Confederate ram CSS Albemarle at the Battle of Albemarle Sound in May 1864. (Submitted on August 24, 2010, by Sandra Hughes Tidwell of Killen, Alabama, USA.)