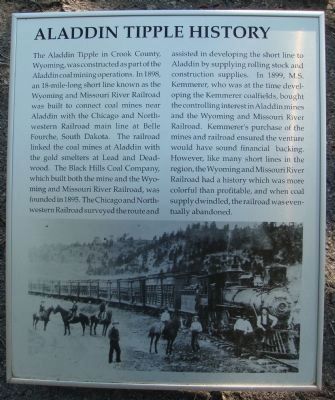 Photographed By William J. Toman, August 12, 2010
1. Aladdin Tipple Marker
Inscription.
Aladdin Tipple History. . The Aladdin Tipple in Crook County, Wyoming, was constructed as part of the Aladdin coal mining operations. In 1898, an 18-mile-long short line known as the Wyoming and Missouri River Railroad was built to connect coal mines near Aladdin with the Chicago and Northwestern Railroad main line at Belle Fourche, South Dakota. The railroad linked the coal mines at Aladdin with the gold smelters at Lead and Deadwood. The Black Hills Coal Company, which built both the mine and the Wyoming and Missouri River Railroad, was founded in 1895. The Chicago and Northwestern Railroad surveyed the route and assisted in developing the short line to Aladdin by supplying rolling stock and construction supplies. In 1899, M.S. Kemmerer, who was at the time developing the Kemmerer coalfields, bought the controlling interest in Aladdin mines and the Wyoming and Missouri River Railroad. Kemmerer's purchase of the mines and railroad ensured the venture would have sound financial backing. However, like many short lines in the region, the Wyoming and Missouri River Railroad had a history which was more colorful than profitable, and when coal supply dwindled, the railroad was eventually abandoned. . This historical marker is Near Aladdin in Crook County Wyoming 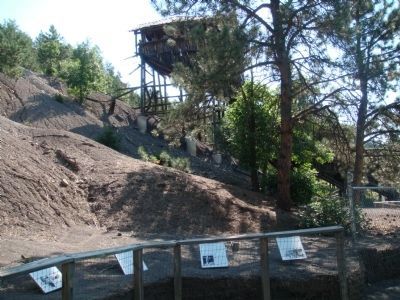 Photographed By William J. Toman, August 12, 2010
2. Aladdin Tipple History Marker
With related markers and the tipple in the background.

Click or scan to see
this page online
was eventually abandoned.

Topics. This historical marker is listed in these topic lists: Industry & Commerce • Man-Made Features. A significant historical year for this entry is 1898.

Regarding Aladdin Tipple History. According to a sidebar in the Fiscal Year 1997 Interior Accountability Report by the federal Office of Surface Mining, "The Aladdin mine began operation in the late 1800’s and coal was mined until it was abandoned in 1942. The mine is about 83 miles northeast of Gillette, Wyoming. The coal was used 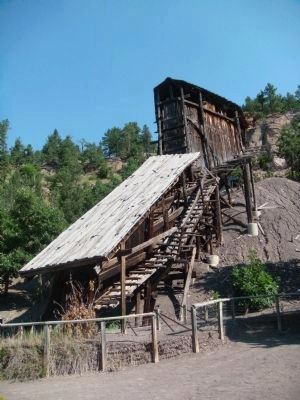 Photographed By William J. Toman, August 12, 2010
3. Aladdin Tipple
The east face of the tipple with the catwalk visible.
as a local fuel source and to fire the gold smelters in Lead and Deadwood, South Dakota. It was one of the first underground mines in northeastern Wyoming and was a privately owned operation. The mine was first investigated for reclamation by the Wyoming AML [abandoned mine lands] program in 1989, and the historic qualities of the site immediately came to light. The old Tipple was in imminent danger of collapse because of neglect and weathering, and it posed a significant safety hazard as it was located adjacent to a popular tourist route. The tipple, hoist house, and mine opening were restored, and the site was reclaimed and developed as a historical interpretive park. It receives extensive use by the schools in the area for history and heritage field trips and is a popular tourist stopover. Another reason for retaining the site was the presence of two organisms that are unusual and unique to the Rocky Mountain west. These organisms play fundamental roles in the natural bioremediation of disturbed lands. Scientists at Black Hills State University in nearby Spearfish, South Dakota, are studying the saprophytic relationships in this process of natural bioremediation in the living laboratory provided by the historic Tipple site. The site is maintained by the Crook County Commissioners and the local historical society, and it has been nominated for the National Register of Historic 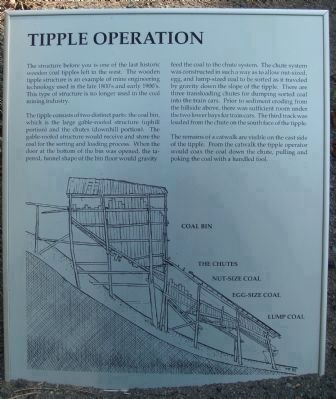 Photographed By William J. Toman, August 12, 2010
4. Related Marker: Tipple Operation
Text: The structure before you is one of the last historic wooden tipples left in the west. The wooden tipple structure is an example of mine engineering technology used in the late 1800's and early 1900's. This type of structure is no longer used in the coal mining industry.

The tipple consists of two distinct parts: the coal bin, which is the large gable-roofed structure (uphill portion) and the chutes (downhill portion). The gable-roofed structure would receive and store the coal for the sorting and loading process. When the door at the bottom of the bin was opened, the tapered, funnel shape of the bin floor would gravity feed the coal to the chute system. The chute system was constructed in such a way as to allow nut-sized, egg, and lump-sized coal to be sorted as it traveled by gravity down the slope of the tipple. There are three transloading chutes for dumping sorted coal into the train cars. Prior to sediment eroding from the hillside above, there was sufficient room under the two lower bays for train cars. The third track was loaded from the chute on the south face of the tipple.