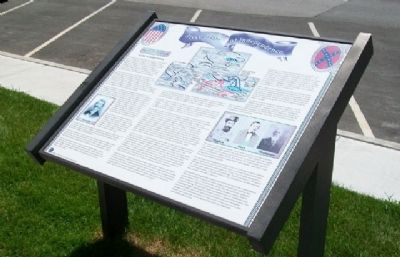 The Battle of Independence was fought at this and other locations on Aug. 11, 1862. On that day, a force of Confederate soldiers launched a dawn surprise attack on the Union garrison stationed at Independence and compelled it to surrender. It was the worst Federal defeat in Missouri since the Battle of Lexington in September of the preceding year. Assisting in the attack was the guerrilla leader, William Quantrill. The Confederate victory was a costly one. Any strategic gain was offset by the loss of several able officers including the commander, Col. John T. Hughes.

The year of 1862 started well for the Northern cause in the Trans-Mississippi West. Victories at Pea Ridge, Ark. in March and at Island No. 10/New Madrid, Mo. the following month seemed to point to secure Federal control of this theater. Two developments, however, were to dispel any such hope for the Union high command. The first was the eruption on Missouri's western border of a guerrilla warfare that was to grow in viciousness with each succeeding year of the war. The most notable of the guerrilla leaders, William C. Quantrill, was, in early 1862, already acquiring 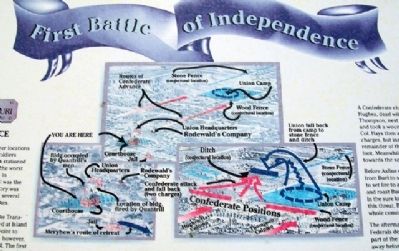 Click or scan to see
this page online
a fearsome reputation for ambushing and killing Yankees.

The second development was rooted in the campaign being planned by the Confederate commander of the Trans-Mississippi theater, Gen. Thomas C. Hindman. By the middle of the summer, this energetic and resourceful officer was developing a strategy to create a third front in the war west of the Mississippi. He proposed to launch an invasion into Missouri from his Arkansas base of operations. A part of his plan called for sending officers, who had been notable Missourians before the war, back into the state to recruit and enroll men in their home neighborhoods and bring them back to Arkansas by fall. They were to cover their operations by fostering an escalation in the guerrilla war. This would keep the Unionists diverted while they went about recruiting.

By late June, the first of these officers, Col. Upton Hays, returned to his home county of Jackson to raise a regiment of cavalry. He sent word ahead to Quantrill to move his band out of the immediate area and keep the Federals occupied; on July 11, Quantrill got into a hot firefight with Union troops at the Battle of the Ravines in northern Cass County.

In the meantime, Hays had managed, by the beginning of August, to gather about 150 men. At their camp, near Lee's Summit, a Confederate flag flying from a high pole could easily be spotted by potential 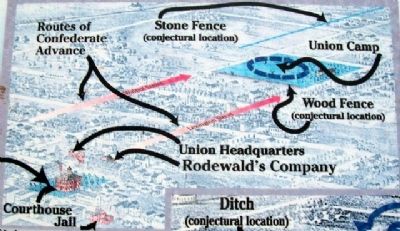 Photographed By William Fischer, Jr., July 31, 2010
3. First Battle of Independence Marker Map
recruits but also by Federal lookouts in the cupola of the courthouse in Independence.

On the first of August, Col. John T. Hughes, the ranking Confederate officer, arrived at Hays' camp with 75 men. He intended to raise a brigade north of the Missouri River, but he feared that his return back across the river would be blocked by the large Federal garrision at Independence. He decided to attack the garrison at once.

Time was of the essence, for if he did not attack the Independence garrison immediately, they could turn the tables by attacking him. Indeed, at that very moment plans were being laid by the Federal commander at Independence, Col. James T. Buel, to clean out the Confederate's encampment and scatter or capture their recruits.

To carry off his planned assault, Hughes enlisted the aid of Hays and Quantrill, who was back from his diversionary foray. On Aug. 10, this combined force rode to Blue Springs, the staging area for the next day's assault. Hays' 300 recruits, plus Quantrill's 25 guerrillas and Hughes' force of 75, added up to an attack force of 400 men.

Meanwhile, at Independence, Lt. Col. Buel had between 400 and 500 men to defend his position. This force consisted of three companies of the Seventh Missouri Cavalry, two companies of Col. Newgent's Second Battalion, Missouri Provisional Militia commanded by Capts. Jacob Axline 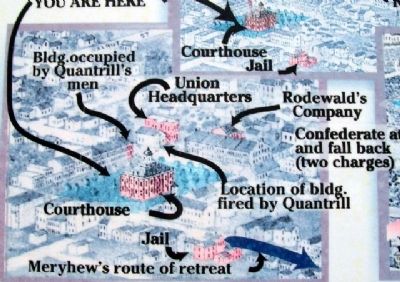 Buel ignored warnings of imminent attack and left his command widely dispersed. He was headquartered in the three-story Southern Bank Building while Capt. Rodewald's company was across the street in a two story brick building. Both buildings faced Lexington Street and were located approximately in the middle of the next block to the west from where you are presently standing. Lt. Maryhew, acting Provost-Marshal, was stationed a few blocks away at the jail. Located at 217 N. Main St., the jail building is currently a museum operated by the Jackson County Historical Society. One-half mile distant, out of view and earshot of headquarters, the rest of the command was encamped in tents south of Lexington St. on the western edge of the city. The dangerously exposed camp was in a depression; the only protection for the camp was a nearby half-mile long stone fence that ran east-west and came within 90 feet of the southwest corner of the camp. This area is presently occupied by the temple and grounds of the Community of Christ Church, formerly known as the Church of Reorganized Latter Day Saints.

At 4:30 a.m. on Aug. 11, the Confederates quietly rode into town and hitched their horses along the courthouse square (at approximately 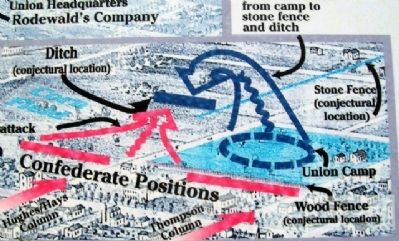 Photographed By William Fischer, Jr., July 31, 2010
5. First Battle of Independence Marker Map
this location); the attackers then formed up and marched west along Lexington Street and past Buel's headquarters. This unidentified force of soldiers was nearly past the headquarters before they were finally recognized as the enemy by Capt. Rodewald's sentries, who opened fire. Capt. Rodewald managed to form his men in the street and fire a volley into the rear ranks of the Confederates. He held his position until about 6 a.m., at which time Buel ordered him into the headquarters building. Quantrill's men immediately surrounded the building and began to pour a hail of fire into it. The comanding officer was now unable to communicate with his main force or direct a defense against his attackers.

Meanwhile, Hughes' main force marched in two columns down Lexington and Walnut streets and arrived undetected at the Union camp where they formed behind a wooden fence and opened fire. A murderous volley poured into the tents of the sleeping federals, many of whom were killed or wounded. Capt. Jacob Axline managed to rally the soldiers erupting from their tents and form them behind the nearby stone fence. Behind this shelter, they were able to beat off repeated onslaughts by the enemy.

A Confederate charge at daybreak left the commander, Col. Hughes, dead with a shot through the forehead. Col. G. W. Thompson, next in command, led another unsuccessful charge and took 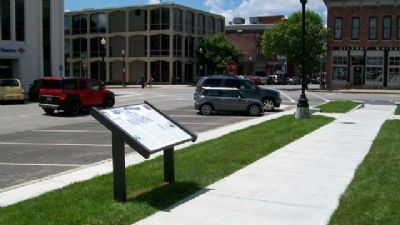 Photographed By William Fischer, Jr., July 31, 2010
6. First Battle of Independence Marker
Looking WSW toward intersection of Lexington and Liberty.
a wound in the knee that put him out of the action. Col. Hays then assumed command. Wisely, he ordered no more charges, but instead exchanged rifle fire with the enemy for the remainder of the engagement. Hays received a wound in the foot. Meanwhile, Capt. Axline was preparing to move his force towards the square to try to reach Buel.

Before Axline could set his force in motion, he received orders from Buel to surrender. Quantrill threatened that he was going to set fire to a small building next to the headquarters building and roast Buel and his men alive in the spreading conflagration. In the sure knowledge that Quantrill could and would carry out this threat, Buel hauled up the white flag and surrendered his whole command.

The aftermath of the Battle of Independence found some 26 Federals dead and 74 wounded; 11 of these later died. A good part of the garrison managed to escape by slipping away before or during the fight, and Lt. Maryhew withdrew his force up Main St. at the beginning of the battle. About 150 troops surrendered. The Union commanders, Buel and Breckinridge, were later tried for conspiracy and cowardice but never convicted.

The price for Confederate victory was 23 killed, and nine mortally wounded. Ten of this number were officers. The dead included three colonels, two majors, three captains, and two lieutenants. Hughes was an especially 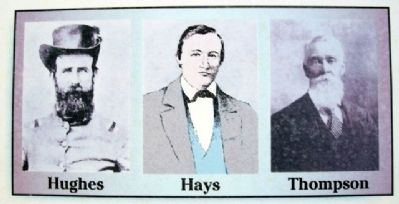 Photographed By William Fischer, Jr., July 31, 2010
7. CSA Officer Images on First Battle Marker
sad loss as he was one of Missouri's ablest officers. For this toll, the Confederates secured enough arms and ammunition to equip Hays' slim regiment, and drove away with 20 wagonloads of plunder.

Five days after the Independence battle, Union and Confederate forces clashed again in Jackson County, this time at the fierce and bloody Battle of Lone Jack. Although the Confederates were again the victors, their triumph was gained at the cost of many casualties and few advantages. Shortly thereafter, in the face of a Union troop build-up in western Missouri, the Confederates, and what recruits they gathered, returned to Arkansas.

To Quantrill and his guerrillas could go much credit for the victory at Independence. Their scouting had revealed the enemy strength and positions and they ably guided Hughes' force to the battle site. Finally, they forced Buel to surrender, when it appeared that the Confederates would be unable to capture Axline's command. On Aug. 15, Quantrill's band was mustered into the Confederate army as partisan rangers, and Quantrill, himself, received a captain's commission. This mustering hardly meant that Quantrill and his band were now disciplined regulars in the Confederate Army, but they would continue to carry on their bloody style of guerrilla warfare against Federal forces in Missouri with deadly effectiveness. 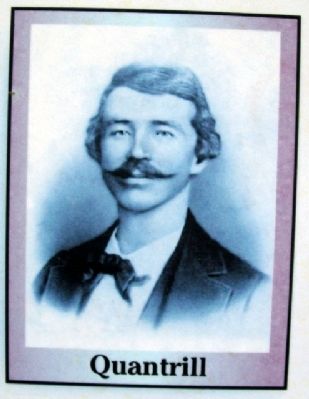 Topics and series. This historical marker is listed in this topic list: War, US Civil. In addition, it is included in the Missouri - A State Divided: The Civil War in Missouri series list. A significant historical month for this entry is July 1811.