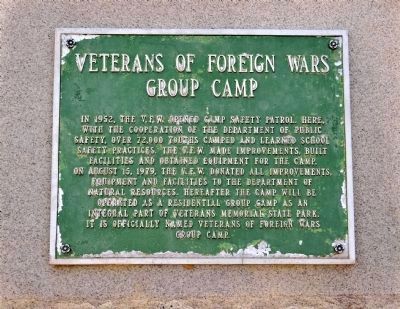 In 1952, the V.F.W. opened Camp Safety Patrol. Here, with the cooperation of the Department of Public Safety, over 72,000 youths camped and learned school safety practices. The V.F.W. made improvements, built facilities and obtained equipment for the camp. On August 15, 1979, the V.F.W. donated all improvements, equipment and facilities to the Department of Natural Resources. Hereafter the camp will be operated as a residential group camp as an integral part of Veterans Memorial State Park. It is officially named Veterans of Foreign Wars Group Camp.

Topics. This historical marker is listed in these topic lists: Charity & Public Work • Education • Fraternal or Sororal Organizations. A significant historical year for this entry is 1952.

Location. 31° 57.246′ N, 83° 54.966′ W. Marker is near Cordele, Georgia, in Crisp County. Marker is on Clay Pit Road 0.1 miles south of Georgia Veterans Road, on the right when traveling south. The marker is located in Georgia Veterans Memorial State Park (fee required), at the entrance to the Lake Blackshear Golf Club and Resort, built on the site of the VFW Group 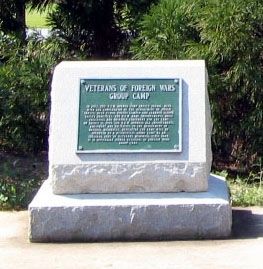 Click or scan to see
this page online
Camp and Camp Safety Patrol. Touch for map. Marker is in this post office area: Cordele GA 31015, United States of America. Touch for directions. 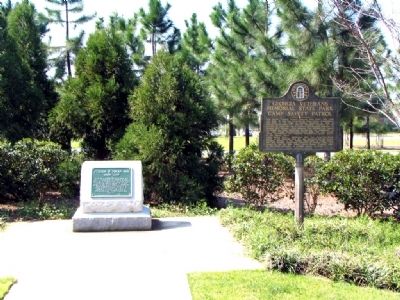