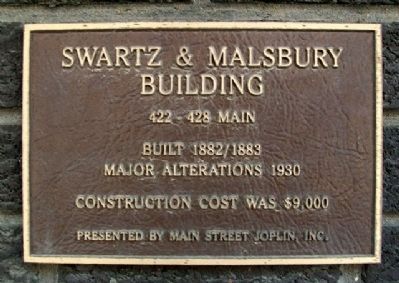 Topics. This historical marker is listed in this topic list: Notable Buildings. A significant historical year for this entry is 1930.

Other nearby markers. At least 8 other markers are within 2 miles of this marker, measured as the crow flies. Quinby Building (within shouting distance of this marker); Joplin (about 400 feet away, measured in a direct line); The Connor Hotel (about 500 feet away); Jasper County Courthouse (approx. ¼ mile away); Joplin World War II Memorial (approx. 0.3 miles away); Joplin Korean War and Vietnam War Memorial (approx. 0.3 miles away); First Major Lead Strike 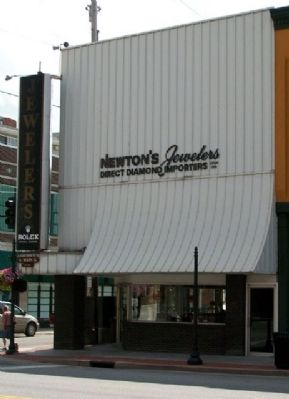 Photographed By William Fischer, Jr., June 26, 2010
2. Swartz & Malsbury Building and Marker
Marker is on brick wall between display window and glass door to the right side of photo.