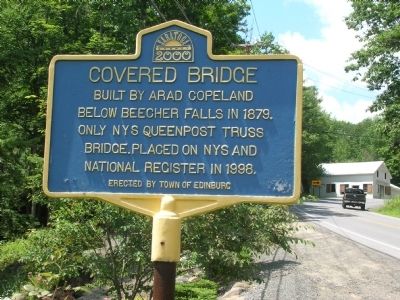 By Howard C. Ohlhous, June 30, 2008
1. Covered Bridge Marker - Edinburg, NY
Inscription.
Covered Bridge. .
Built by Arad Copeland below Beecher Falls in 1879. Only NYS Queenpost Truss Bridge. Placed on NYS and National Register in 1998. . This historical marker was erected in 1999 by the Town of Edinburg. It is in Edinburg in Saratoga County New York

Built by Arad Copeland
below Beecher Falls in 1879.
Only NYS Queenpost Truss
Bridge. Placed on NYS and
National Register in 1998

Erected 1999 by the Town of Edinburg.

Topics and series. This historical marker is listed in this topic list: Bridges & Viaducts. In addition, it is included in the Covered Bridges 🌉 series list. A significant historical year for this entry is 1879.

Location. 43° 13.258′ N, 74° 6.021′ W. Marker is in Edinburg, New York, in Saratoga County. Marker is on North Shore Road (County Route 4), on the right when traveling east. The marker and covered bridge are located near the 4 corners intersection of Edinburg and the Batchellerville Bridge which crosses the northern arm of the Great Sacandaga Lake. Touch for map. Marker is in this post office area: Northville NY 12134, United States of America. Touch for directions. 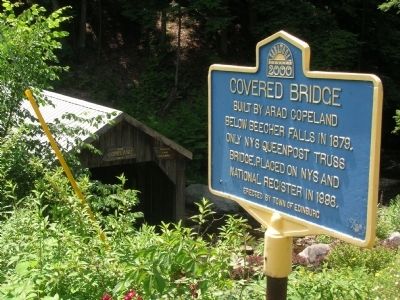 Regarding Covered Bridge. Edingburg, NY is in northern Saratoga County. The portion of Edinburg formerly known as Beecher Creek Hollow was named for prominent businessman Capt. Ely Beecher who settled in Edinburgh about 1800.

Arad Copeland (1805-1884) built the quaint old bridge in 1879 after a previous open bridge had been destroyed by melting spring snow and ice. He decided to build the present covered bridge to get his cows safely to pasture on the other side of Beecher Creek. The bridge had remained in the Copeland family until the fall of 1997 when great, great grandson Robert Tyrrell and his wife Betty graciously deeded the bridge over to the Edinburg Historical Society. Thereafter the society obtained funding for a rehabilitation of the bridge. 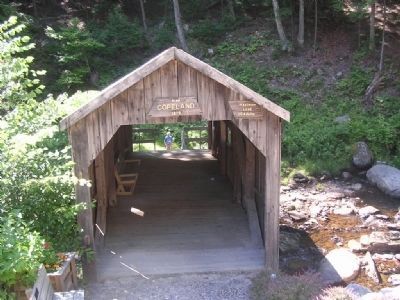 By Howard C. Ohlhous, June 30, 2008
3. Portal View of Bridge
The sign on the left says, "Arad COPELAND 1879" and on the right, "Maximum Load 10 Adults"
the bridge. This is the only covered bridge left in Saratoga County, NY and it has always been used for animal and pedestrian traffic. This bridge has a 35-foot span built on a Queenpost truss. A Queenpost Truss is a lengthened version of the King Post truss. The peak of the King Post is replaced by a horizontal top chord which allows for bridges with longer spans.

The Copeland Covered Bridge was placed on the National Register of Historic Places on August 6, 1998.

In the fall of 1999, the historic marker was placed near the Copeland Covered Bridge. (NY-46-01)
The bridge numbers are assigned by the National Society for the Preservation of Covered Bridges, the Copeland bridge being "NY-46-01."

Also see . . .  The Town of Edinburg page for the Copeland Covered Bridge. (Submitted on July 14, 2008, by Howard C. Ohlhous of Duanesburg, New York.) 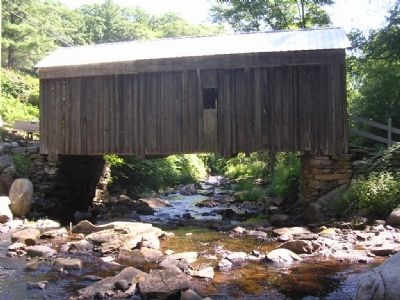 By Howard C. Ohlhous, June 30, 2008
4. Down-Stream View of Bridge
The bridge has a pair of slightly off-center windows, and sits high on stone abutments to keep clear of the swift spring freshets. 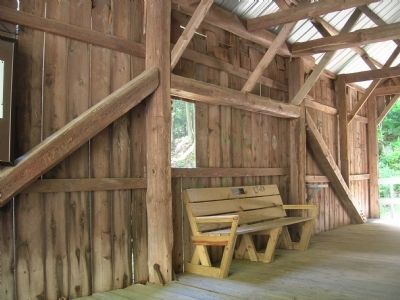 By Howard C. Ohlhous, June 30, 2008
5. Bridge Interior
The Queen post truss which supports the bridge is clearly seen in this view. The two diagonally beams which join the "H" frame around the park bench and window make up the Queen post truss, the only one of this type in New York State. 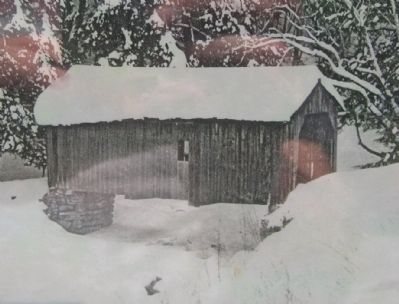 By Howard C. Ohlhous, June 30, 2008
6. Winter View
This winter view of the bridge is posted on a roadside parking area display which highlights the bridge's history. 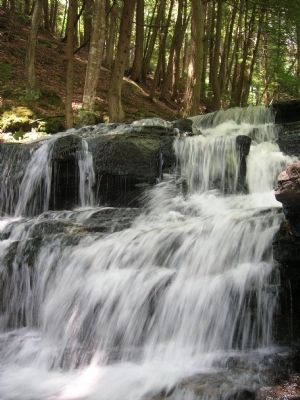 By Howard C. Ohlhous, June 30, 2008
7. Beecher Creek Falls
This picturesque cascade is only a few steps away, just upstream from the Copeland Covered Bridge. 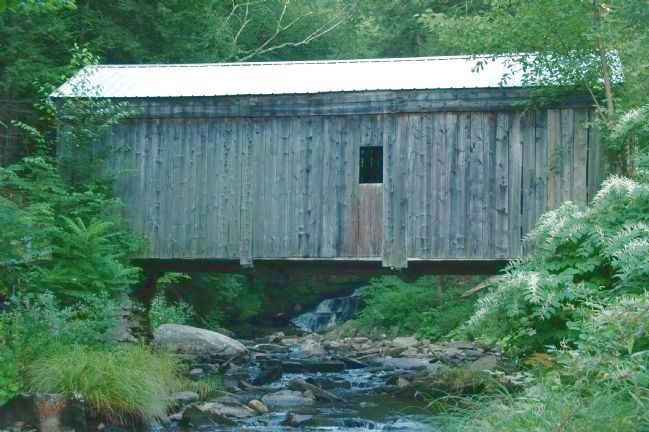 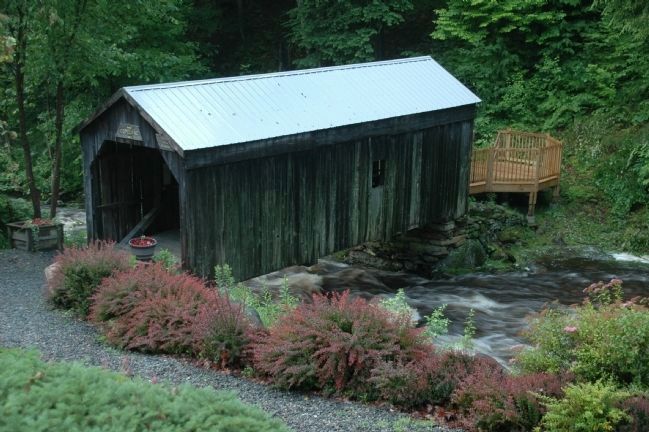 By Howard C. Ohlhous, July 3, 2013
9. Arad Copeland Covered Bridge
New decking has been added on the far side of the bridge. 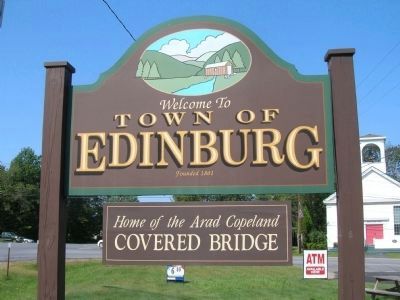