The Board of County Commissioners
County of Hillsborough 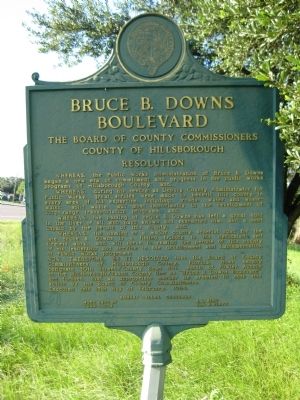 WHEREAS, the Public Works Administration of Bruce B. Downs began a new era of commitment and progress in the public works programs of Hillsborough County; and,
WHEREAS, during his tenure as Deputy County Administrator for every area of his expertise, including: roads; water and waste-water; solid waste; but most importantly in the development of long-range transportation programs; and,
WHEREAS, the passing of Bruce B. Downs has left a great void in the lives of all who have known and respected him, and a debt unpaid by the people of this county; and,
WHEREAS, the naming of a major county arterial road for the late Bruce B. Downs is a fitting tribute to his dedicated and tireless work, and will serve to remind the people of this county of his leadership and service in the development and implementation of Public Works programs;
NOW, THEREFORE, BE IT RESOLVED that the Board of County Commissioners of Hillsborough County, Florida, does hereby designate 30th Street/County Road 581, north of Fowler Avenue to the Hillsborough/Pasco County line as "Bruce B. Downs Boulevard", and further, that an appropriate marker be 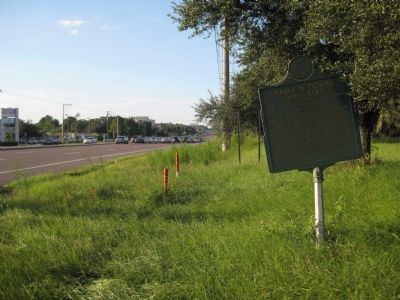 Photographed By AGS Media, September 1, 2010
2. Bruce B. Downs Boulevard Marker
Seen along the roadway of the same name

Click or scan to see
this page online
erected to note this action by the Board of County Commissioners.
Executed this 15th day of February, 1984.

Erected by The Board of County Commissioners of Hillsborough County, Florida.

Topics. This historical marker is listed in this topic list: Roads & Vehicles. A significant historical month for this entry is February 1984.

More about this marker. The marker is located along the western edge of the main campus of the University of South Florida. It is capped with the old Seal of Hillsborough County, Florida (which has been retired since the marker was erected).

Regarding Bruce B. Downs Boulevard. 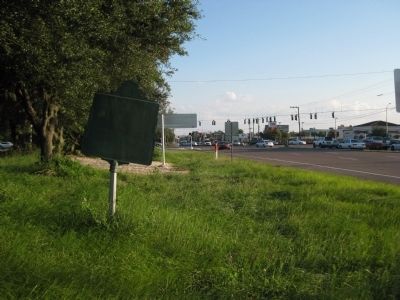 Photographed By AGS Media, September 1, 2010
3. Bruce B. Downs Boulevard Marker (rear)
The rear side of the marker is void of any text or other content. Seen in the distance is the intersection of Fowler Avenue and 30th Street/Bruce B. Downs Boulevard.
Bruce Barkley Downs was an engineer with the Florida Department of Transportation for 29 years before he began his very effective and successful tenure as Director of Public Works for the county. Downs was responsible for improving local infrastructure and helped bring about a local gas tax to finance building and repair of roadways.

In 1983, just after a local newspaper story credited him for having one of the most stressful jobs in Hillsborough County, Downs collapsed and died from a massive heart attack at the age of 56.

At the time of his death, 30th Street was a quiet, little-used country road. As Bruce B. Downs Boulevard, it has grown into one of the most high-traffic arterial roadways in the county.

Bruce B. Downs was honored with a "Great Floridians 2000" designation by the Florida League of Cities and Florida Department of State. 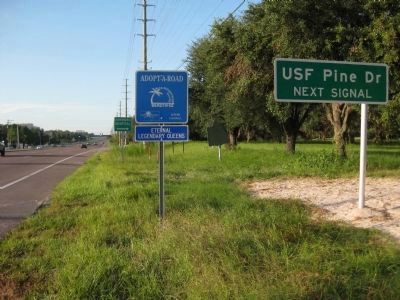 Photographed By AGS Media, September 1, 2010
4. Bruce B. Downs Boulevard Roadside Signage
The historical marker is seen in the distance here, between the signs for "Adopt A Road" and "USF Pine Drive". 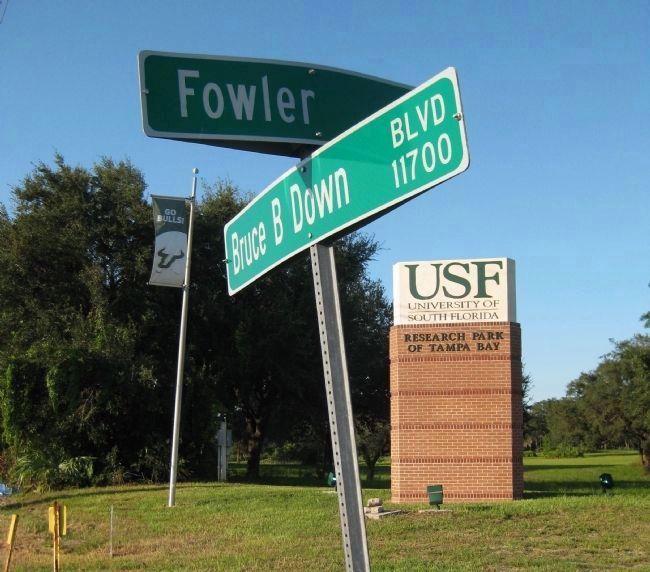 Photographed By AGS Media, September 1, 2010
5. Fowler Ave. and Bruce B. Downs Blvd.
The intersection (immediately south of the historical marker) borders the southwest corner of the main campus of the University of South Florida. South of Fowler Avenue, Bruce B. Downs Boulevard reverts to its original name, 30th Street. 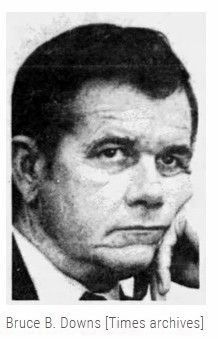