Site of the Birth Place of Rev. Anthony Foucher 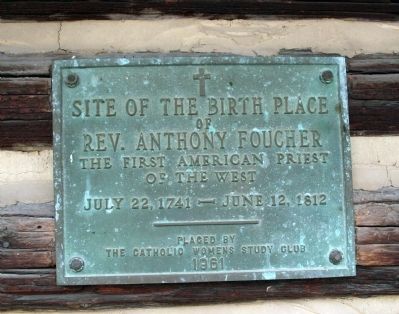 Location. 40° 24.382′ N, 86° 57.813′ W. Marker is near West Lafayette, Indiana, in Tippecanoe County. Marker is on South River Road west of County Road 300 W, on the left when traveling west. Located to the right of the East Entrance of Fort Ouiatenon Historic Park. Touch for map. Marker is in this post office area: West Lafayette IN 47906, United States of America. Touch for directions.

Other nearby markers. At least 8 other markers are within 4 miles of this marker, measured as the crow flies. Fort Ouiatenon (within shouting distance of this marker); Liberty Tree (about 300 feet away, measured in a direct line); Post Ouiatenon Site (about 500 feet away); The Wea Plains (approx. 3.3 miles away); Scott's Expedition (approx. 3.3 miles away); History - Main Street Bridge (approx. 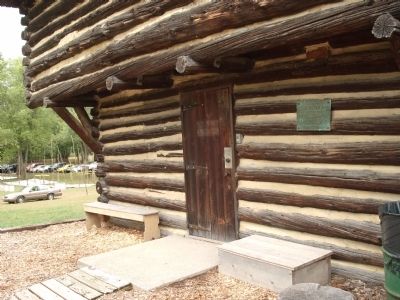 Regarding Site of the Birth Place of Rev. Anthony Foucher. The first religion of Indiana was that of the Roman Catholic Church, brought by those missionaries of New France who followed the lakes and rivers leading to the valley of the Wabash. The earliest of these priests was the Jesuit Allouez. The ground on which this mission stood is the earliest recorded land grant in the territory comprising the State's present limits. It was made in 1686 to the Jesuit Missions on condition of their erecting a house and chapel there within three years. Here the founder of the church in Indiana died in 1689. His place was taken by Father Claude Aveneau. The mission was suspended by trouble with the Miamis for a few years, but in 1706 was restored under Father James Gravier.

In 1719 at Fort Ouiatenon on the Wabash below the present Lafayette, then at Fort Miami where Fort Wayne now stands, and finally in 1733 at Poste au Ouabache (later and still known as Vincennes), Jesuit missionaries were established almost continuously down to 1763. On 22 July, 1741, at Fort Ouiatenon 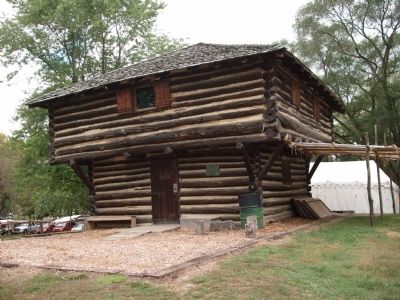 By Courtesy:: Marilyn Wolf, September 26, 2010
3. Fort Ouiatenon (Blockhouse)
was born a child, Anthony Foucher, who was destined to be the first native of the State to receive Holy orders.
(Source: http://www.newadvent.org/cathen/07738a.htm - Catholic Encyclopedia) 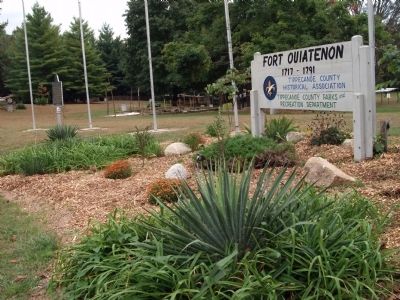 By Courtesy:: Marilyn Wolf, September 26, 2010
5. Flags
The text reads: "These eight flags represent the flags that possibly flew over the site of Fort Ouiatenon. The Wabash country was home to many people. Each group left its own impact on the culture and the land, and their symbols help tell the story of Ouiatenon." 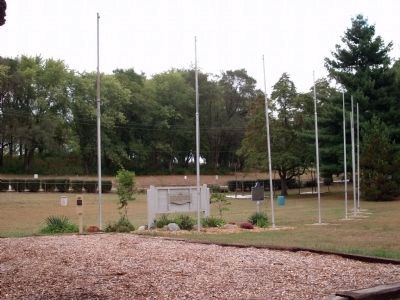 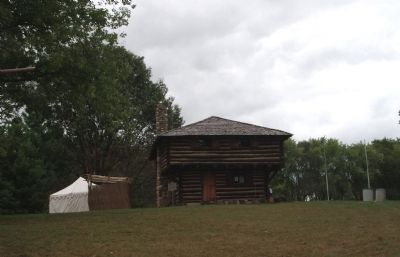 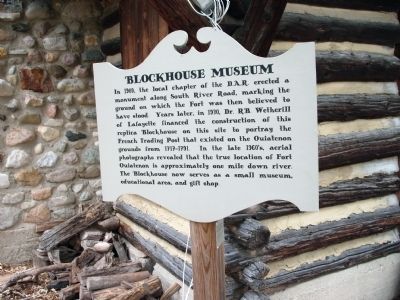 By Courtesy:: Marilyn Wolf, September 26, 2010
8. Sign - - "Blockhouse Museum"
The text reads: "In 1909, the local chapter of the D.A.R. erected a monument along South River Road, marking the ground on which the Fort was then believed to have stood. Years later, in 1930, Dr. R. B. Wetherill of Lafayette financed the construction of this replica Blockhouse on this site to portray the French Trading Post that existed on the Ouiatenon grounds from 1717-1791. In the late 1960's, aerial photographs revealed that the true location of Fort Ouiatenon is approximately one mile down river. The Blockhouse now serves as a small museum, educational area, and gift shop."
Credits. This page was last revised on November 19, 2019. It was originally submitted on September 27, 2010, by Al Wolf of Veedersburg, Indiana. This page has been viewed 844 times since then and 22 times this year. Photos:   1, 2, 3, 4, 5, 6, 7, 8. submitted on September 27, 2010, by Al Wolf of Veedersburg, Indiana. • Syd Whittle was the editor who published this page.

Editor’s want-list for this marker. Photos of the Flags. • Can you help?
Share This Page.