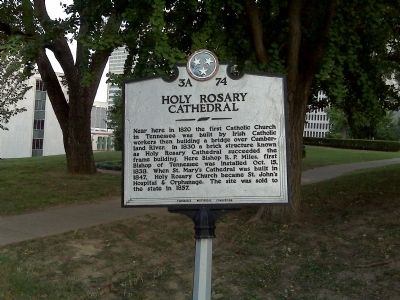 Near here in 1820 the first Catholic Church in Tennessee was built by Irish Catholic workers then building a bridge over Cumberland River. In 1830 a brick structure known as Holy Rosary Cathedral succeeded the frame building. Here Bishop R. P. Miles, first Bishop of Tennessee was installed Oct. 15, 1838. When St. Mary's Cathedral was built in 1847, Holy Rosary Church became St. John's Hospital & Orphanage. The site was sold to the state in 1857.

Topics and series. This historical marker is listed in this topic list: Churches & Religion. In addition, it is included in the Tennessee Historical Commission series list. A significant historical year for this entry is 1820.

Location. 36° 9.993′ N, 86° 47.037′ W. Marker is in Nashville, Tennessee, in Davidson County. Marker can be reached from 6th Avenue. The marker is located on the Tennessee State Capitol Grounds and is very near James K. Polk's tomb. In fact in the long shot you can see the columns of the tomb behind the marker. Touch for map. Marker is in this post office area: Nashville TN 37219, United States of America. Touch for directions. 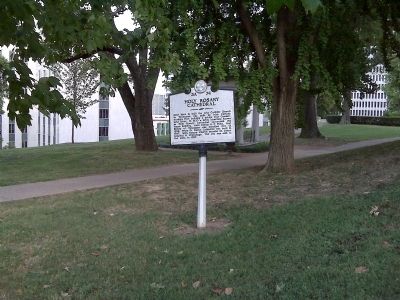