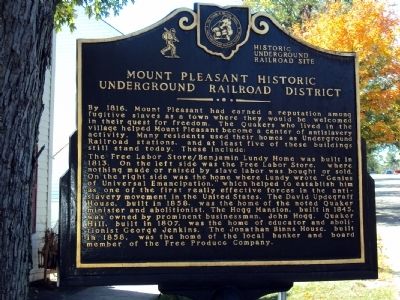 By 1816, Mount Pleasant had earned a reputation among fugitive slaves as a town where they would be welcomed in their quest for freedom. The Quakers who lived in the village helped Mount Pleasant become a center of antislavery activity. Many residents used their homes as Underground Railroad stations, and at least five of these buildings still stand today. These include:

The Free Labor Store/Benjamin Lundy Home was built in 1813. On the left side was the Free Labor Store, where nothing made or raised by slave labor was bought or sold. On the right side was the home where Lundy wrote "Genius of Universal Emancipation," which helped to establish him as one of the first really effective forces in the antislavery movement in the United States. The David Updegraff House, built in 1858, was the home of the noted Quaker minister and abolitionist. The Hogg Mansion, built in 1845, was owned by prominent businessman, John Hogg. Quaker Hill, built in 1807, was the home of educator and abolitionist George Jenkins. The Jonathan Binns House, built in 1858, was the home of the local banker and board member of the Free Produce Company. 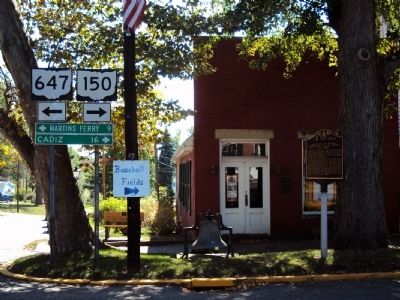 Click or scan to see
this page online
The Friends of Freedom Society and Ohio Underground Railroad Association.

Topics and series. This historical marker is listed in this topic list: Abolition & Underground RR. In addition, it is included in the Quakerism series list. A significant historical year for this entry is 1816.