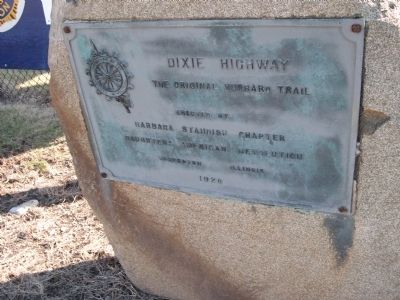 Topics and series. This historical marker is listed in this topic list: Roads & Vehicles. In addition, it is included in the Daughters of the American Revolution (DAR), and the Unitarian Universalism (UUism) series lists.

Location. 40° 27.811′ N, 87° 41.24′ W. Marker is in Hoopeston, Illinois, in Vermilion County. Marker is on Illinois Route 1 north of West Elm Street, on the right when traveling north. Marker sits outside of the McFerren Park Fence - by the Hoopeston sign and the extra large green metal corn stalk. Touch for map. Marker is in this post office area: Hoopeston IL 60942, United States of America. Touch for directions. 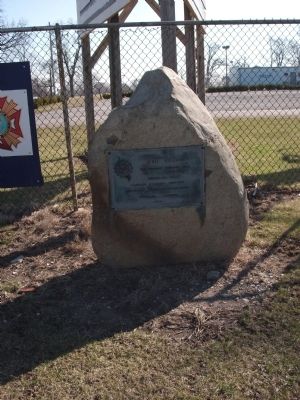 Regarding Dixie Highway. "The Barbara Standish Chapter (Hoopeston, Ill.) accomplished an object dear to the heart of our retiring Regent, Mrs. E. J. Boorde, when we met to dedicate the Dixie highway, September 24, 1920…"
At 3:30 P.M. the Regent, Mrs E. J. Boorde, called the assemblage to order and Rev. Harvey H. Hoyt, of the Universalist Church, offered an invocation.
Mrs Boorde, in a short address, explained the history and the objectives of the Daughters of the American Revolution, and introduce Mrs. H. E. Chubbuck, State Regent.
Mrs Chubbuck read an interesting paper on the aims and objectives of the organization, in which she offered some valuable suggestions as to the conduct of the local chapters, and spoke of the far-reaching effect of the ratification of the Nineteenth Amendment to the Federal Constitution, which has made women equal citizens of the commonwealth and Nation.
Mrs Boorde then introduced Miss Lottie E. Jones, of 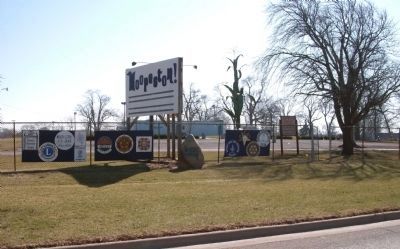 Photographed By Al Wolf, March 15, 2009
3. Wide View - Dixie Highway Marker
Hoopeston is known as the Sweet Corn Capital of the Mid-West having an annual "Sweet Corn Festival". So there is much pride in the large metal green corn plant by their sign. The marker can be seen, in the photo, on the highway side of the McFerren Park fence.
Danville, who gave many interesting historical incidents of the Hubbard Trail and its connection with the Dixie Highway, and of Gordon S. Hubbard’s life history, after which Mrs Mary C. Lee, of Champaign, was introduced, whose address was “Americanization.”
Mrs. Boorde, in the name of Barbara Standish Chapter, then presented the marker to the public, and Miss Eleanor Kent Williams, daughter of Mr. And Mrs. James A Williams and a lineal descendant of Betsy Ross, who made the first American flag, pulled the silken cord that removed the flag covering the tablet. The act was greeted with applause and cheers and the dedication was complete, marking an interesting incident in the annals of local history.
(As reported by Mrs J. F. Fannie Griggs, Tilton Historian:: D. A. R. 1920 Illinois State Magazine, Pp. 291-292.)

Connections to other HMDb markers:
1)Miss Lotte Jones who spoke at the "Dixie Bee" marker unvailing - and - Mrs E. J. Boorde, sister to Mr. J. R. Thompson of Chicago, were responsible for the "Special" Lincoln Eighth Circuit Marker at the "Thompson Farm" placed there in 1921.
2)This "Dixie Bee" marker has many interesting ties to a number of items, all of which is bowed up with "Lottie Jones" a very active person of value to society.
In 1915 Miss Lottie Jones was 'Chair-woman' of the "American Revolution Fountain" in Danville, Ill.. 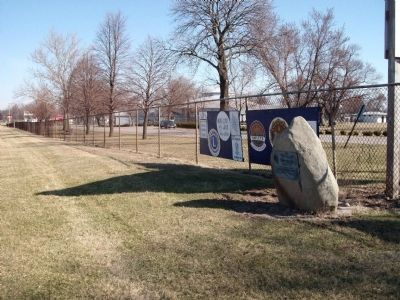 Photographed By Al Wolf, March 15, 2009
4. Looking North - Dixie Highway Marker
The entrance to McFerren Park is on the next street North. There is parking across the street from the boulder or through an access gate from McFerren Park.
This American Revolution Memorial was designed by the same men that designed the "Lincoln Memorial" (Daniel C. French did the Lincoln sitting statue and Henry Bacon designed the building) in Washington, D. C.. - and - the same, "Henry
Bacon", who designed the stone work of "Lincoln Eighth Circuit Marker" used throghout the entire Illinois Eighth Judicial Circuit that Lincoln traveled as a Lawyer.
3) This “Dixie Bee” marker (on its large boulder) sits at the half way point between Vincennes, Indiana and Chicago, Illinois and replicates an original ‘mile marker’ in location and style of the old “Vincennes to Chicago Road” mile markers. It is believed that an extra large boulder was used for the marker - so it would stand out as the 'half way' point.
Click below 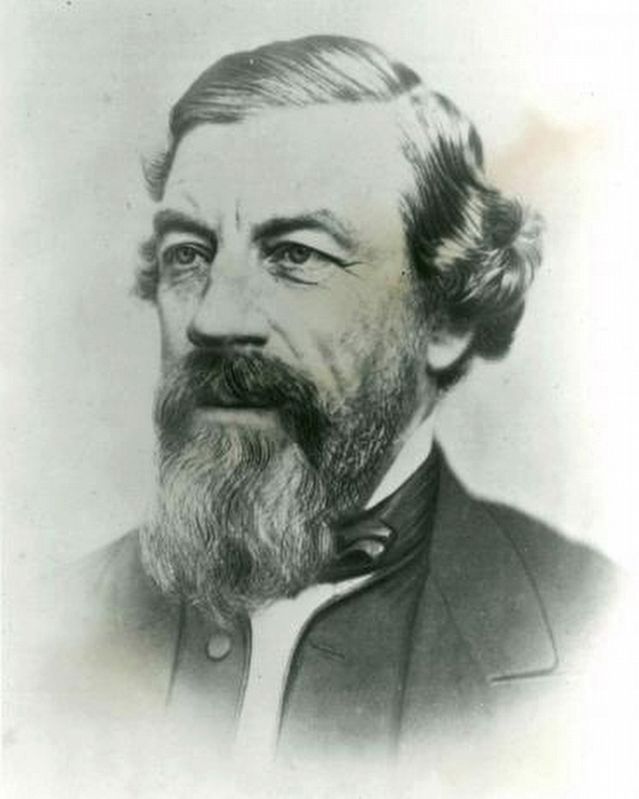