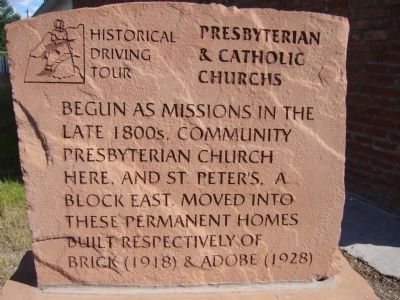 Photographed By Bill Kirchner, September 19, 2010
1. Presbyterian & Catholic Churchs Marker
Inscription.
Presbyterian and Catholic Churchs. . , Begun as missions in the late 1800s, Community Presbyterian Church here, and St. Peter's, a block east, moved into these permanent homes built respectively of brick (1918) and adobe (1928). . This historical marker was erected in 2002 by Round Valley Positive Action Tourism Committee and Springerville-Eagar Chamber of Commerce.. It is in Springerville in Apache County Arizona

Topics and series. This historical marker is listed in this topic list: Churches & Religion. In addition, it is included in the Arizona, Pistols, Plows and Petticoats Historic Driving Tour series list. 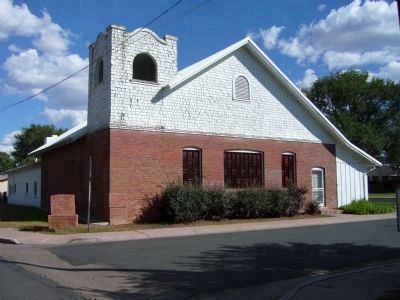 Photographed By Bill Kirchner, September 19, 2010
2. Presbyterian Church
Community Presbyterian Church of Springerville began Sunday School in Round Valley in 1894 with nineteen members from prominent pioneer families. Presbyterian Missionary James A. Menaul came twice a year to administer to the congregation. They first met in homes and then later a saloon called “Hunters Hall.” Its first regular Pastor, Reverend Robert Ballagh, arrived in 1906. In 1915 a lot was purchased by the Ladies Aid Society and the church was completed in 1918. 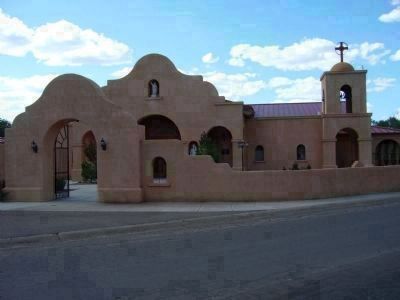 Photographed By Bill Kirchner, September 19, 2010
3. St. Peter's Catholic Church
Church website homepage:
Father Badilla established a mission church in Round Valley and would walk the 60 miles from St. Johns every week to conduct mass. When local prominent resident J.J. Baca acquired his first automobile he would often tactfully schedule his business trips to St. Johns to coincide with Father Badilla’s trips to Round Valley in order to give him a lift. The first Catholic Church was built on the present site of the Baptist Church. When J.J. Baca’s entertainment hall burned down in 1927 he donated the land to the church and St. Peter’s Catholic Church, made of adobe bricks and designed by Jenano Acosta, was built on the site. It had a choir loft, stained glass windows and an organ. The first services were held here in 1928. In 1949 a gas leak exploded and blew out the adobe side walls, but the front façade remained intact. The church was remodeled and upgraded in 2003.