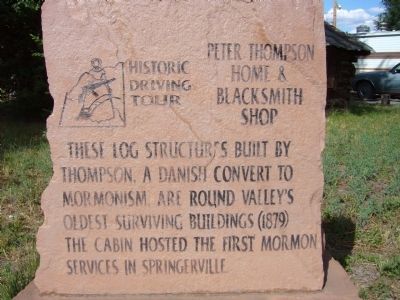 Photographed By Bill Kirchner, September 19, 2010
1. Peter Thompson Home & Blacksmith Shop Marker
Inscription.
Peter Thompson Home and Blacksmith Shop. . These log structures built by Thompson, a Danish convert to Mormonism, are Round Valley's oldest surviving buildings (1879). The cabin hosted the first Mormon services in Springerville. . This historical marker was erected in 2002 by Round Valley Positive Action Tourism Committee and Springerville-Eagar Chamber of Commerce.. It is in Springerville in Apache County Arizona

These log structures built by Thompson, a Danish convert to Mormonism, are Round Valley's oldest surviving buildings (1879). The cabin hosted the first Mormon services in Springerville.

Topics and series. This historical marker is listed in this topic list: Notable Buildings. In addition, it is included in the Arizona, Pistols, Plows and Petticoats Historic Driving Tour series list.

Location. 34° 8.234′ N, 109° 17.026′ W. Marker is in Springerville, Arizona, in Apache County. Marker is on North Papago Street, 0.2 miles north of Apache Street, on the right when traveling north. Touch for map. Marker is in this post office area: Springerville AZ 85938, United States of America. Touch for directions. 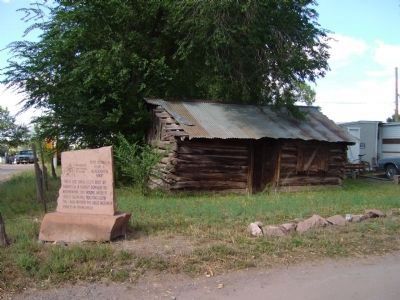 Photographed By Bill Kirchner, September 19, 2010
2. Peter Thompson Home & Blacksmith Shop
The log home which stood next to this blacksmith shop burned in 1998.

More about this marker. This is Marker Stop #24 on the Pistols, Plows and Petticoats Historic Driving Tour.

Regarding Peter Thompson Home & Blacksmith Shop. Peter Thompson was born in Denmark in 1825. He fought in the Danish wars with Prussia over the sovereignty of Schleswig-Holstein. In 1864, as the forces of Austria and Prussia crushed the Danish military, Peter converted to Mormonism and came to America with his wife and children. They originally settled in Utah. He lived in Utah for over a decade and was a grandfather by the time he answered the Church’s call to colonize the Little Colorado River area of Arizona.

He came to Round Valley with his wife and seventh, and youngest son, Erastus. Here in 1879 he built a two-room log cabin and the log blacksmith shop. The cabin burned in 1998, but the blacksmith shop still stands.

Those were difficult times for the Mormon settlers in Round Valley. Homes were lost to land-jumpers antagonistic to Mormonism and at times outlaws living in the area would shoot at them, or beat them, just for fun. Many settlers left their claims, after urging of the Church, and joined fellow Mormons at the Amity Ward in Springerville.