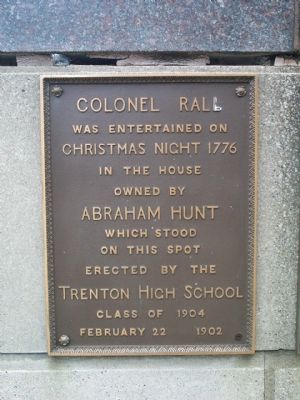 By Gary Nigh, November 16, 2007
1. Abraham Hunt House Marker
Inscription.
Abraham Hunt House. .
Colonel Rall was entertained on Christmas night 1776 in the house owned by Abraham Hunt which stood on this spot.. . This historical marker was erected in 1902 by the Trenton High School Class of 1904. It is in Trenton in Mercer County New Jersey

Colonel Rall
was entertained on
Christmas night 1776
in the house
owned by
Abraham Hunt
which stood
on this spot.

Topics. This historical marker is listed in these topic lists: Entertainment • War, US Revolutionary.

Location. 40° 13.224′ N, 74° 45.959′ W. Marker is in Trenton, New Jersey, in Mercer County. Marker is at the intersection of North Warren Street and West State Street, on the right when traveling south on North Warren Street. This marker is on the wall of the front plaza of the Mary Roebling State Office Building next to the marker on the First Professional Basketball Game. Touch for map. Marker is in this post office area: Trenton NJ 08608, United States of America. Touch for directions. 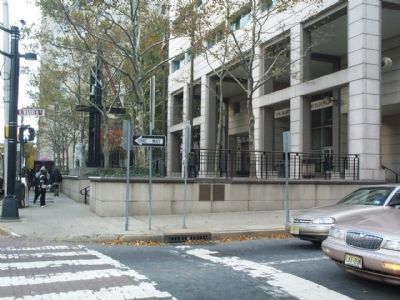 Regarding Abraham Hunt House. The Battle of Trenton occurred the very next morning. General George Washington crossed the frozen Delaware River through a severe winter storm Christmas night and attacked Colonel Rall’s troops which were quartered in Trenton. By 9:30 a.m. on the 26th the Continental Army achieved victory. 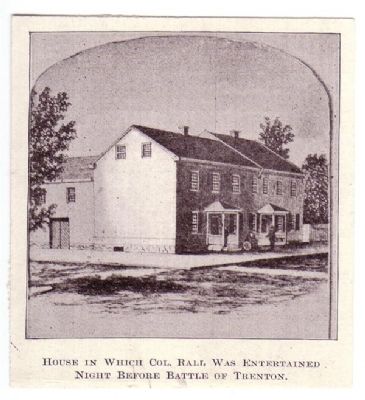