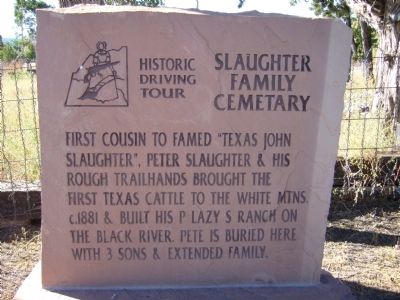 Photographed By Bill Kirchner, September 24, 2010
1. Slaughter Family Cemetary Marker
Inscription.
Slaughter Family Cemetary. . First cousin to famed "Texas John Slaughter", Peter Slaughter and his rough trailhands brought the first Texas cattle to the White Mtns. C.1881 and built his P Lazy S Ranch on the Black River. Pete is buried here with 3 sons and extended family. . This historical marker was erected in 2002 by Round Valley Positive Action Tourism Committee and Springerville-Eagar Chamber of Commerce.. It is in Springerville in Apache County Arizona

Topics and series. This historical marker is listed in this topic list: Cemeteries & Burial Sites. In addition, it is included in the Arizona, Pistols, Plows and Petticoats Historic Driving Tour series list. A significant historical year for this entry is 1881.

Location. 34° 7.53′ N, 109° 16.71′ W. Marker is in Springerville, Arizona, in Apache County. Marker is on East Maricopa Drive, half a mile west of Gutierrez Street, on the left when traveling west. Touch for map. Marker is in this post office area: Springerville AZ 85938, United States of America. Touch for directions.

Other nearby markers. At least 8 other markers are within walking distance of this marker. White Mountain Historical Park (approx. ¼ mile away); Springerville Schoolhouse (approx. half a mile away); Arizona Cooperative Mercantile Institution 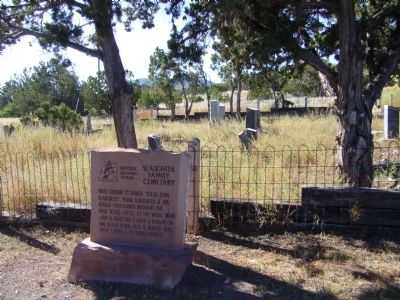 More about this marker. This is marker Stop #2 on the Pistols, Plows and Petticoats Historic Driving Tour.

Regarding Slaughter Family Cemetary. Buried in the cemetery are members of the family, extended family and friends of Peter Eldridge Slaughter, Texas cattleman, Arizona pioneer and first cousin of “Texas” John Horton.

Over a five-year period Peter and his brother Mason brought the first big trail herd of Texas cattle to the White Mountains of Arizona. Bringing one-fifth of the herd each year and the household outfit the last year, he started his P Lazy S Arizona ranch. When his children were old enough to attend school he moved the family to Springerville and built them a home.

Three of his sons, Nathaniel, Monte and Paschal (Pat) are buried here along side their father. Nathaniel and his twin brother Mathew, died in infancy from diphtheria. Mollie, Peter’s wife begged 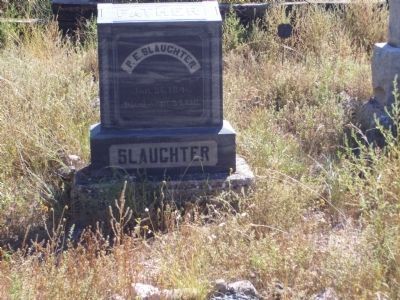 Photographed By Bill Kirchner, September 24, 2010
3. Peter Slaughter Grave Site
her husband to take the babies to Springerville for medical treatment, of which he failed to do in time. This eventually led to the breakup of their marriage. Mathew is believed to be buried on the ranch.

The older Slaughter boys loved to drink and considered themselves “bad” men, which they were not. Monte was killed in the Saffell Saloon in 1901 by Deputy Sheriff Edward Beeler following a bar fight. Three months later Deputy Beeler was gunned down and it was rumored that the shooter had been Pat. After fleeing to Texas, he eventually returned to Springerville and was never charged.
Source: The Pistols, Plows and Petticoats Historic Driving Tour Brochure. 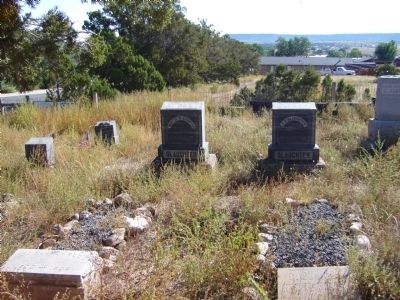