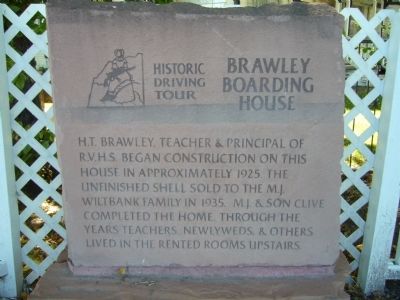 Photographed By Bill Kirchner, September 24, 2010
1. Brawley Boarding House Marker
Inscription.
Brawley Boarding House. . H.T. Brawley, teacher and principal of R.V.H.S. began construction on this house in approximately 1925. The unfinished shell sold to the M.J. Wiltbank Family in 1935. M.J. and son Clive completed the home. Through the years teachers, newlyweds and others lived in the rented rooms upstairs. . This historical marker was erected in 2002 by Round Valley Positive Action Tourism Committee and Springerville-Eagar Chamber of Commerce.. It is in Springerville in Apache County Arizona

H.T. Brawley, teacher and principal of R.V.H.S. began construction on this house in approximately 1925. The unfinished shell sold to the M.J. Wiltbank Family in 1935. M.J. & son Clive completed the home. Through the years teachers, newlyweds & others lived in the rented rooms upstairs.

Topics and series. This historical marker is listed in this topic list: Notable Buildings. In addition, it is included in the Arizona, Pistols, Plows and Petticoats Historic Driving Tour series list. A significant historical year for this entry is 1925.

Other nearby markers. At least 8 other markers are within walking distance of this marker. William LeSueur Home (approx. 0.2 miles away); Harry Colter Home (approx. ¼ mile away); 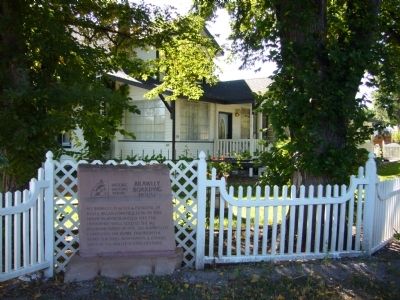 More about this marker. This is Marker Stop #4 on the Pistols, Plows and Petticoats Historic Driving Tour.

Regarding Brawley Boarding House. H.T. Brawley came to Edgar in 1921 to teach at the new Round Valley High School. Students came from Eagar, Springerville, Greer, Alpine and Nutrioso, New Mexico. Brawley taught Science and Mathematics and in the fall of 1923 became the principal.

Classes were first held in private homes and the Edgar Ward Chapel for three years and then in 1924 moved to a new site which was located at the current high school site.

Teachers were always single and boarded with families or lived at the Apache Chief Hotel in Springerville. In 1925 Brawley began his two story frame boardinghouse near the high school so that teachers new to the community would have a more homelike place to room close to the campus. He never finished the 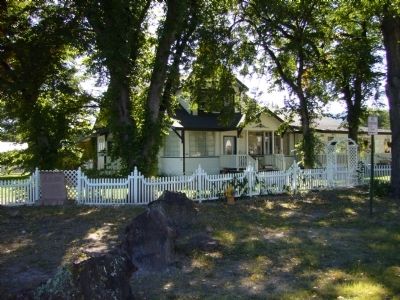 Photographed By Bill Kirchner, September 24, 2010
3. Brawley Boarding House
house but did live in its shell for a few years.

He sold it to M.J. Wiltbank in 1935 for $3,000, but no money ever changed hands. The sum was paid with 15 cows and lumber that Wiltbank and his son hauled from the mountain with horses and had sawn at the Fred Bunk Sawmill in Greer.
Source: The Pistols, Plows and Petticoats Historic Driving Tour Brochure.
Credits. This page was last revised on June 16, 2016. It was originally submitted on October 5, 2010, by Bill Kirchner of Tucson, Arizona. This page has been viewed 993 times since then and 48 times this year. Photos:   1, 2, 3. submitted on October 5, 2010, by Bill Kirchner of Tucson, Arizona. • Syd Whittle was the editor who published this page.
Share this page.