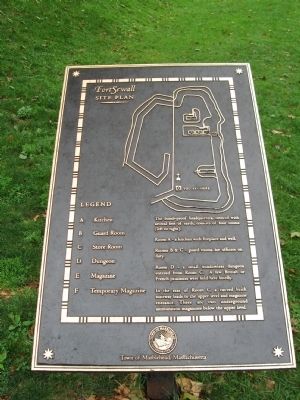 The bomb-proof headquarters, covered with several feet of earth, consists of four rooms (left to right):
Room A – a kitchen with fireplace and well.
Rooms B & C – guard rooms with for officers on duty.
Room D – a small windowless dungeon entered from Room C. A few British or French prisoners were held here briefly.
In the rear of Room C, a curved brick stairway leads to the upper level and magazine entrance. There are two underground ammunition magazines below the upper level.
Town Of Marblehead, Massachusetts

Location. 42° 30.498′ N, 70° 50.515′ W. Marker is in Marblehead, Massachusetts, in Essex County. Marker can be reached from the intersection of Front Street and Fort Sewall Terrace, on the right when traveling north. Located in Fort Sewall. Touch for map. Marker is in this post office area: Marblehead MA 01945, United States of America. Touch for directions. 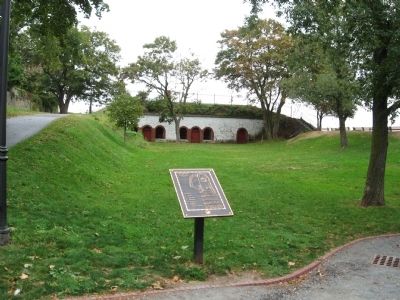 Photographed By Michael Herrick, September 27, 2010
2. Fort Sewall Site Plan Marker
Beyond is the bomb-proof headquarters described on the marker