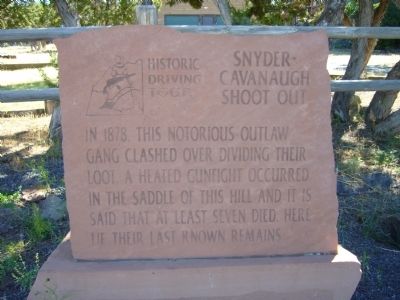 Photographed By Bill Kirchner, September 24, 2010
1. Snyder-Cavanaugh Shoot Out Marker
Inscription.
Snyder-Cavanaugh Shoot Out. . In 1878, this notorious outlaw gang clashed over dividing their loot. A heated gunfight occurred in the saddle of this hill and it is said that at least seven died. Here lie their last known remains. . This historical marker was erected in 2002 by Round Valley Positive Action Tourism Committee and Springerville-Eagar Chamber of Commerce.. It is in Eagar in Apache County Arizona

In 1878, this notorious outlaw gang clashed over dividing their loot. A heated gunfight occurred in the saddle of this hill and it is said that at least seven died. Here lie their last known remains.

Topics and series. This historical marker is listed in this topic list: Cemeteries & Burial Sites. In addition, it is included in the Arizona, Pistols, Plows and Petticoats Historic Driving Tour series list. A significant historical year for this entry is 1878.

Other nearby markers. At least 8 other markers are within one mile of this marker, measured as the crow flies. Old Grist Mill Site (approx. half a mile away); Eagar Elementary School (approx. ¾ mile away); Oscar Jepson Home (approx. 0.8 miles away); Joseph Udall Barn 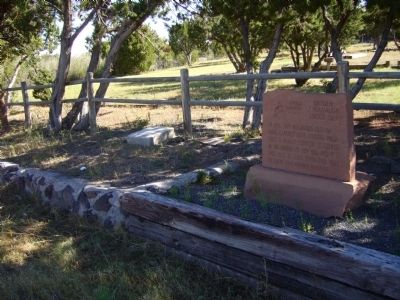 More about this marker. This is Marker Stop #6 on the Pistols, Plows and Petticoats Historic Driving Tour.

Regarding Snyder-Cavanaugh Shoot Out. A stone slab next to the marker marks the location of the last known remains of the Snyder-Cavanaugh Gang, a notorious band of outlaws who came into the Little Colorado River country in 1878. They robbed and killed up and down the river and prompted Don Lorenzo Hubbell, the famous Indian trader to the Navajos, who then had a store in St. Johns, to buy guns and ammunition and arm the residents of St. Johns.

Led by Bill Cavanaugh, who also went by the alias of Snyder, the gang had a falling out over $12,000 in gold they had taken from a German whom they had robbed and killed. A gunfight erupted among them here that killed several gang members and left Cavanaugh-Snyder badly wounded. The remainder of the gang traveled down the river to St. Johns and got into a battle with Hubbell and the armed St. Johns residents and several more were killed. Upon their return to Springerville 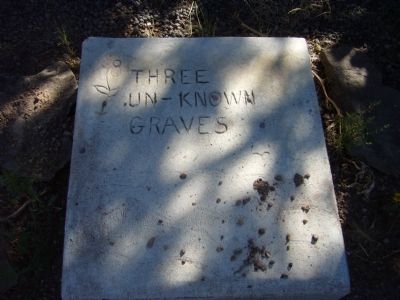 Photographed By Bill Kirchner, September 24, 2010
3. Marker to the left of the Snyder-Cavanaugh Shoot Out Marker
Three members of the gang are buried here.
they again met with resistance from the locals and the rest of the gang was killed. It is said that seven to nine gang members were buried on the hill overlooking the Eagar Sawmill, however when dirt was removed for the building of State Route 73 only the remains of three were found. These remains were relocated to this site and marked with this stone.
Source: The Pistols, Plows and Petticoats Historic Driving Tour Brochure.
Credits. This page was last revised on June 16, 2016. It was originally submitted on October 5, 2010, by Bill Kirchner of Tucson, Arizona. This page has been viewed 1,768 times since then and 103 times this year. Photos:   1, 2, 3. submitted on October 5, 2010, by Bill Kirchner of Tucson, Arizona. • Syd Whittle was the editor who published this page.
Share this page.