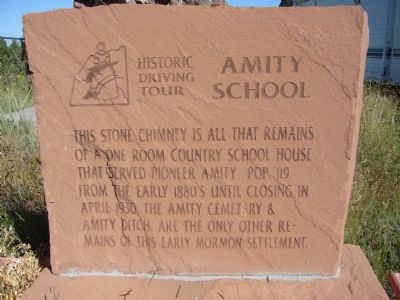 Photographed By Bill Kirchner, September 24, 2010
1. Amity School Marker
Inscription.
Amity School. . This stone chimney is all that remains of a one room country school house that served pioneer Amity pop. 119 from the early 1880's until closing in April 1930. The Amity Cemetery and Amity Ditch are the only other remains of this early Mormon settlement. . This historical marker was erected in 2002 by Round Valley Positive Action Tourism Committee and Springerville-Eagar Chamber of Commerce.. It is Near Eagar in Apache County Arizona

This stone chimney is all that remains of a one room country school house that served pioneer Amity pop. 119 from the early 1880's until closing in April 1930. The Amity Cemetery & Amity Ditch are the only other remains of this early Mormon settlement.

Topics and series. This historical marker is listed in these topic lists: Education • Settlements & Settlers. In addition, it is included in the Arizona, Pistols, Plows and Petticoats Historic Driving Tour series list. A significant historical month for this entry is April 1930. 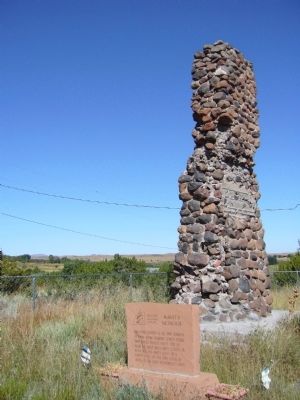 More about this marker. This is Marker Stop #9 on the Pistos, Plows and Petticoats Historic Driving Tour.

Regarding Amity School. Americus Vespucius Greer came in 1877 and homesteaded the west side of the valley and later laid out the townsite of Amity. Spencer W. Wiltbank also homesteaded in the area and hired John Eagar to build the first log home in 1879.

The Mormon Amity Ward was established in 1882 and grew to a population of 119 comprising of 23 families. Most homes had no more than two rooms. There was a blacksmith shop and a tithing office and the area was served by the post office located at the Colter Cross Bar Ranch.

The influx of Mormon colonists into the area created a backlash of discrimination and animosity by those who feared their cooperative economic practices, their powerful voting block and their practice of polygamy. Charges were filed in court and to prevent prosecution, many polygamists fled to Mexico. With the community depleted of their men folk, many anti-Mormon activists were able to jump their claims. The remaining Mormons were instructed by the Church to give up their claims and relocate to the Union Ward, which later became the community of Eagar. Emity’s separate identity slowly began to disappear. Many of Emity’s early pioneers are buried in the Emity graveyard which is only accessible with Tribal permission.

The school was built in the early 1880’s. It was a 30’ by 45’ structure of sawn logs. The school was the social center of the community where classes, dances, meetings and church services were held. The rock fireplace was built by O.M. Bigelow. The school was abandoned in 1930 when the school district consolidated with the Eagar schools. The high school principal purchased the building and converted it to a home. It was later purchased by Horace Marble and again became a social center when on Friday nights there were many parties and dances. It eventually was again abandoned but local young people received permission to use the building for dances. In 1948 the building caught fire after a dance and the boys who built a fire in the fireplace were blamed. They worked hard paying off the owner, Harry Udall. About ten years later a neighbor bragged of having set the fire to prevent future parties in the neighborhood.
Source: Pistols, Plows and Petticoats Historic Driving Tour Brochure.
Credits. This page was last revised on June 16, 2016. It was originally submitted on October 5, 2010, by Bill Kirchner of Tucson, Arizona. This page has been viewed 1,445 times since then and 50 times this year. Photos:   1, 2. submitted on October 5, 2010, by Bill Kirchner of Tucson, Arizona. • Syd Whittle was the editor who published this page.
Share this page.