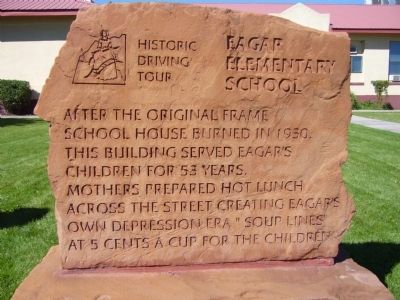 Photographed By Bill Kirchner, September 24, 2010
1. Eagar Elementary School Marker
Inscription.
Eagar Elementary School. . After the original frame school house burned in 1930, this building served Eagar's children for 53 years. Mothers prepared hot lunch across the street creating Eagar's own depression era "soup lines" at 5 cents a cup for the children. . This historical marker was erected in 2002 by Round Valley Positive Action Tourism Committee and Springerville-Eagar Chamber of Commerce.. It is in Eagar in Apache County Arizona

After the original frame school house burned in 1930, this building served Eagar's children for 53 years. Mothers prepared hot lunch across the street creating Eagar's own depression era "soup lines" at 5 cents a cup for the children.

Topics and series. This historical marker is listed in this topic list: Education. In addition, it is included in the Arizona, Pistols, Plows and Petticoats Historic Driving Tour series list. A significant historical year for this entry is 1930.

Location. 34° 6.47′ N, 109° 17.504′ W. Marker is in Eagar, Arizona, in Apache County. Marker is at the intersection of Main Street and West 2nd Street, on the left when traveling north on Main Street. Marker is on northwest corner. Touch for map. Marker is at or near this postal address: 187 Main Street, Eagar AZ 85925, United States of America. Touch for directions. 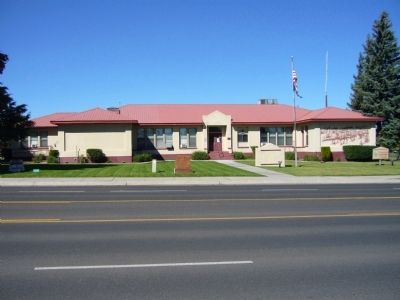 More about this marker. This is Marker Stop #13 on the Pistols, Plows and Petticoats Historic Driving Tour.

Regarding Eagar Elementary School. The Eagar School began in 1896 a little north of the present school. It consisted of one large room divided by a curtain so two classes could be held. The teacher’s heads showed above the curtain, and much that was said was heard on both sides. The first teacher was Sarah Crosby.

A few years later the community applied for a regular school through the County School Fund. It was granted with the stipulation that the community provide a building. The church house was turned over to the school district with the condition that church services would still be held there until a new chapel could be built.

That building burned in 1930 and a new building was erected using bricks from Francis and Simpson Day’s brickyard near the Old Gristmill and was dedicated on December 6, 1930. By 1940 the community recognized the need for a cafeteria and kitchen and an addition on the southside of the building was built for that purpose.
The six-room brick building served the Mormon community for fifty-three years. It now serves as the Eager Town Hall.
Source: The Pistols, Plows and Petticoats Historic Driving Tour Brochure.
Credits. This page was last revised on February 20, 2017. It was originally submitted on October 6, 2010, by Bill Kirchner of Tucson, Arizona. This page has been viewed 1,121 times since then and 67 times this year. Photos:   1, 2. submitted on October 6, 2010, by Bill Kirchner of Tucson, Arizona. • Syd Whittle was the editor who published this page.
Share this page.