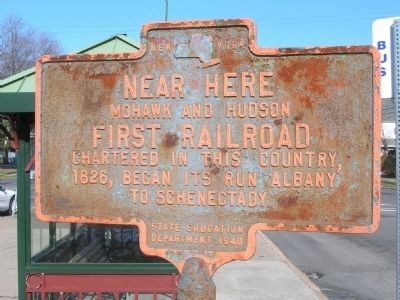 By Howard C. Ohlhous, April 7, 2008
1. First Railroad Marker
Inscription.
First Railroad. .
Near Here Mohawk and Hudson First Railroad Chartered in this Country, 1826, Began its Run Albany to Schenectady. . . This historical marker was erected in 1940 by New York State Education Department. It is in Albany in Albany County New York

Near Here
Mohawk and Hudson
First Railroad
Chartered in this Country,
1826, Began its Run Albany
to Schenectady.

Topics. This historical marker is listed in this topic list: Railroads & Streetcars. A significant historical year for this entry is 1826.

Location. Marker has been reported missing. It was located near 42° 39.987′ N, 73° 47.498′ W. Marker was in Albany, New York, in Albany County. Marker was at the intersection of Western Ave and Madison Ave., on the right when traveling east on Western Ave. Marker is posted beside the bus shelter on a wedge of land between the converging roadways of Western Ave. and Madison Ave, just east of S. Allen St. Touch for map. Marker was in this post office area: Albany NY 12203, United States of America. Touch for directions.

Other nearby markers. At least 8 other markers are within 2 miles of this location, measured as the crow flies. Swinburne Park (approx. 0.7 miles away); "The Elms" (approx. 0.9 miles away); Site of New York Central Railroad Erector Shop (approx. 1.1 miles away); Boats and Music 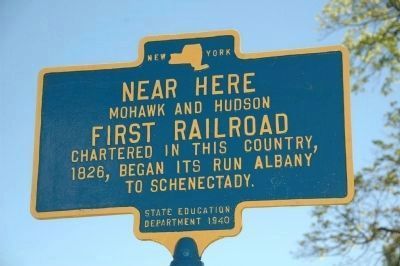 By Howard C. Ohlhous, May 10, 2011
2. First Railroad Marker
An updated view of the marker showing that it has been replaced or cleaned up.

More about this marker. Appears marker has been removed.

Regarding First Railroad. On December 28, 1825, George William Featherstonhaugh ran a newspaper notice announcing the formation of the Mohawk & Hudson Rail Road Company. The Mohawk & Hudson Railroad became the first chartered railroad in New York State on April 17, 1826. Construction began in August 1830 and the railroad opened September 24, 1831, on a 16-mile route between Albany and Schenectady through the Pine Bush region that separates both cities. The DeWitt Clinton locomotive made its first test run on July 2nd that year. The railroad was seen as a way to reduce the amount of time it took for passengers to travel from Albany to Schenectady on the Erie Canal, which was the leading transportation network of the time, due to the 22 locks between the two cities. On April 19, 1847, the name Mohawk and Hudson was changed to the Albany & Schenectady Railroad. The Albany and 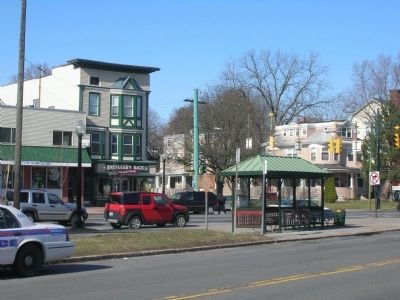 By Howard C. Ohlhous, April 7, 2008
3. First Railroad Marker
Marker is in the center of the photo and to the left of the green roof bus shelter.
Schenectady railroad was later consolidated into the New York Central Railroad on May 17, 1853. 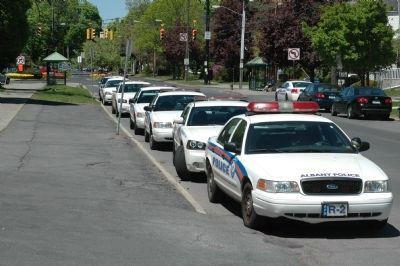 By Howard C. Ohlhous, May 10, 2011
4. First Railroad Marker
Marker is in the upper left corner of photo. The police station is next door. 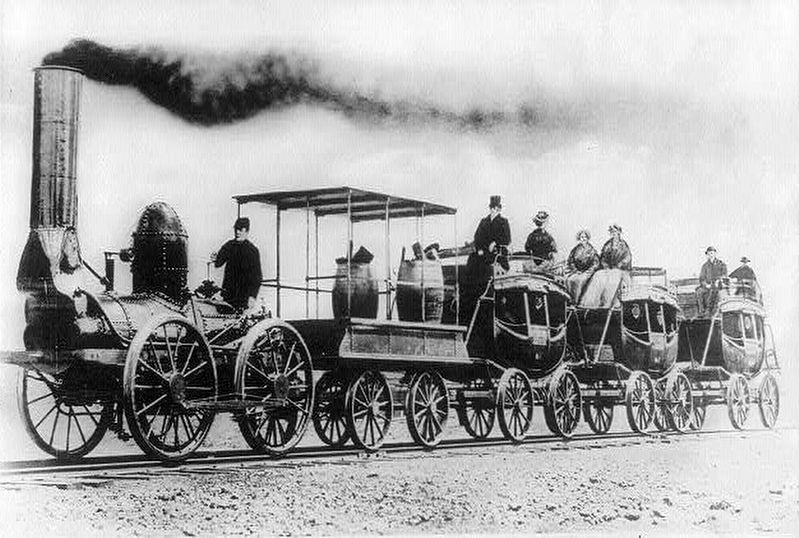 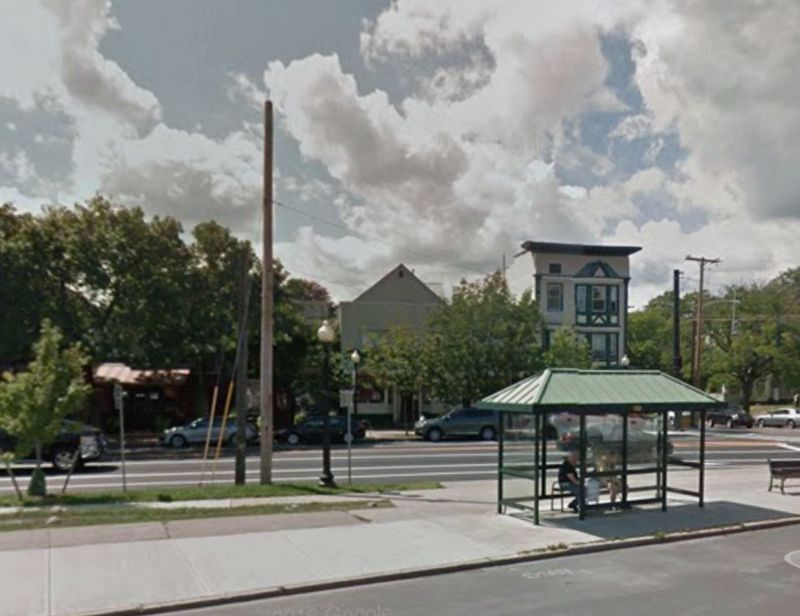 © Google Street View
6. Marker no longer visible as of September 2016. 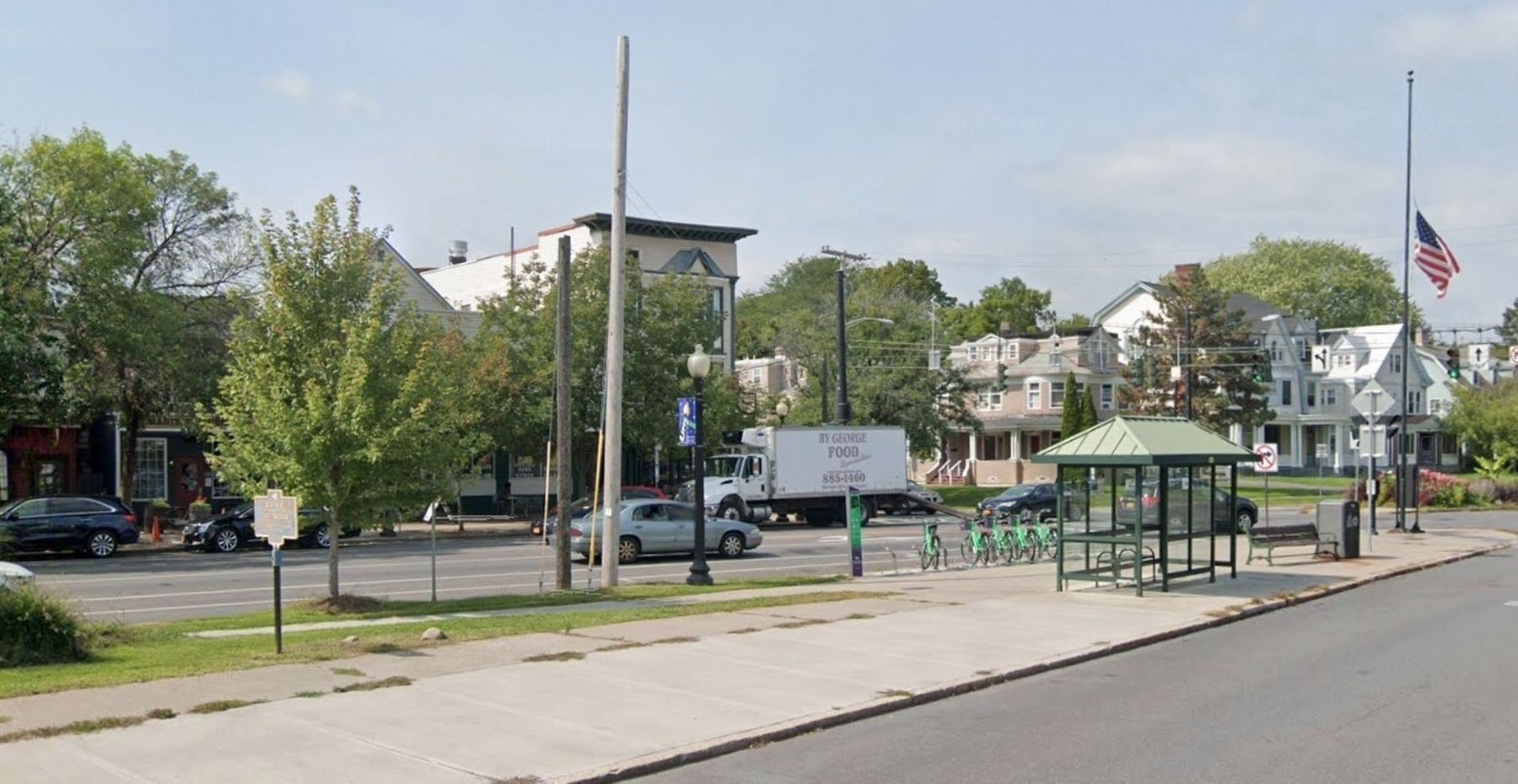