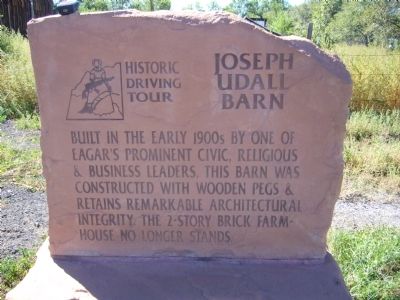 Photographed By Bill Kirchner, September 24, 2010
1. Joseph Udall Barn Marker
Inscription.
Joseph Udall Barn. . Built in the early 1900s by one of Eagar's prominent civic, religious and business leaders, this barn was constructed with wooden pegs and retains remarkable architectural integrity. The 2-story brick farmhouse no longer stands. . This historical marker was erected in 2002 by Round Valley Positive Action Tourism Committee and Springerville-Eagar Chamber of Commerce.. It is in Eagar in Apache County Arizona

Built in the early 1900s by one of Eagar's prominent civic, religious & business leaders, this barn was constructed with wooden pegs & retains remarkable architectural integrity. The 2-story brick farmhouse no longer stands. 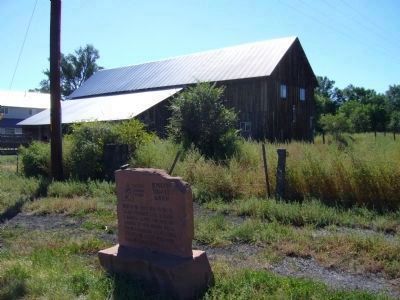 More about this marker. This is Marker Stop #14 on the Pistols, Plows and Petticoats Historic Driving Tour.

Regarding Joseph Udall Barn. Joseph Udall purchased this farm around 1900 from William Eagar, one of the three brothers after whom the town was named. The home consisted of a large two-story adobe house in front and a small log cabin in he rear that the Eagers had used as a kitchen. The adobe had two rooms on the first floor and two on the second which were reached by an outdoor staircase. The Udalls tore down the log cabin in 1910 and built a two story brick addition to the back of the adobe. It was completed in 1911 and had the first indoor bathroom with running water in Eagar.