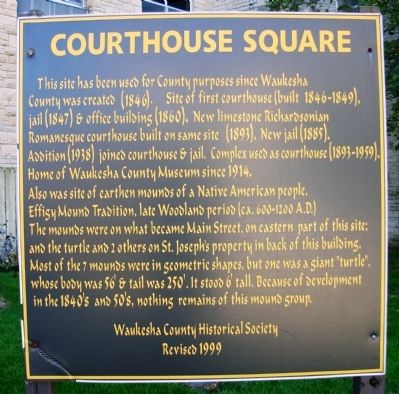 Photographed By Paul F, October 5, 2010
1. Courthouse Square Marker
Inscription.
Courthouse Square. . This site has been used for County purposes since Waukesha county was created (1846). Site of first courthouse (built 1846-1849), jail (1847) and office building (1860). New limestone Richardsonian Romanesque courthouse built on same site (1893). New jail (1885). Addition (1938) joined courthouse and jail. Complex used as courthouse (1893-1959). Home of Waukesha County Museum since 1914. , Also was site of earthen mounds of a Native American people, Effigy Mounds Tradition, late Woodland period (ca. 600-1200 A.D.) , The mounds were on what became Main Street, on eastern part of this site; and the turtle and 2 others on St. Joseph’s property in back of this building. Most of the 7 mounds were in geometric shapes, but one was a giant “turtle”, whose body was 56’ and tail was 250’. It stood 6’ tall. Because of development in the 1840’s 50’s, nothing remains of this mound group. . This historical marker was erected in 1999 by Waukesha Count Historical Society. It is in Waukesha in Waukesha County Wisconsin

Topics. This historical marker is listed in these topic lists: Native Americans • 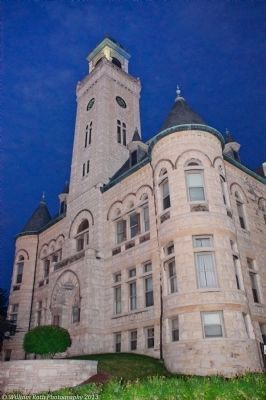 Click or scan to see
this page online
Notable Buildings • Settlements & Settlers. A significant historical year for this entry is 1914.

Additional commentary.
1. Waukesha County Courthouses
On July 4, 1846, the towns west of Milwaukee were separated from Milwaukee County and became Waukesha County. A new governing body was chosen for this new county 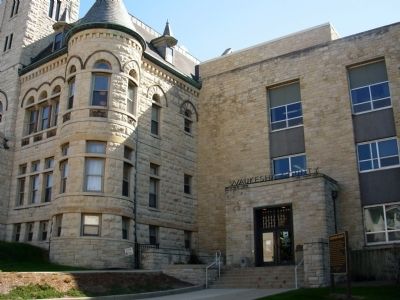 Photographed By Paul F, October 5, 2010
3. Courthouse Square Marker
in the territory of Wisconsin. There were 25 formal ballots taken before Prairieville was chosen to be the county seat. Once that was determined, lots 1, 2, and 3 of Block F on the Prairieville plat map became the site for the county buildings.

In 1885 a new jail was built which added steam heat, iron bunks instead of hammocks, and plumbing connected to the city sewer system. In 1892 an annual inventory taken showed that more space was needed as the county continued to grow. A new and modern courthouse was designed in a Richardson Romanesque style with a Lannon stone exterior.

Some of the unique features of this new building were the Goddess Of Justice statue constructed of iron and gold leaf overlay on the tower, a clock face 7 feet in diameter, and a three-paneled stained glass window with the center panel depicting a blindfolded justice holding scales. Many vaults were independently built of fireproof brick throughout the building to contain the court's documents and other important papers. 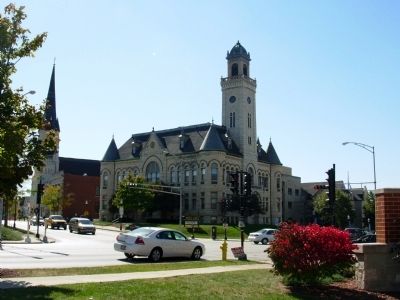 Photographed By Paul F, October 5, 2010
4. Courthouse Square
Looking southwest from corner of Main Street and East Avenue
In March 1893 the old courthouse was razed to make room for the new one. On January 1, 1894, the fist circuit court was held in the new building.

Again in 1938 more office space was needed. It was during the Great Depression, so it was taken on as a WPA project. There were no frills, only clean lines. Later this style was known as Art Deco or Art Moderne.

After World War II and into the 1950s, things were changing and growing again. Parking became a big issue with only street parking available in front of the courthouse. The people of the county wanted to find a piece of land west of the city on which to expand. So a site was purchased on West Moreland Boulevard. The new courthouse and jail was dedicated on October 11, 1959.