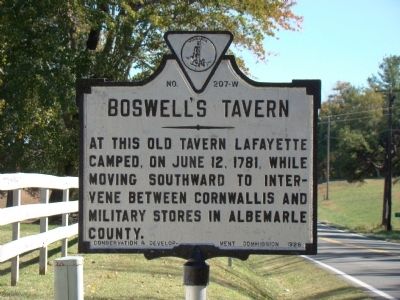 Photographed By J. J. Prats, October 22, 2010
1. Boswell’s Tavern Marker
Inscription.
Boswell’s Tavern. . At this old tavern Lafayette camped, on June 12, 1781, while moving southward to intervene between Cornwallis and military stores in Albemarle County. . This historical marker was erected in 1928 by Conservation and Development Commission. It is in Boswells Tavern in Louisa County Virginia

At this old tavern Lafayette camped, on June 12, 1781, while moving southward to intervene between Cornwallis and military stores in Albemarle County.

Topics and series. This historical marker is listed in this topic list: War, US Revolutionary. In addition, it is included in the Virginia Department of Historic Resources series list. A significant historical month for this entry is June 1884.

Other nearby markers. At least 8 other markers are within 5 miles of this marker, measured as the crow flies. Civilian Conservation Corps Company 2347 (about 500 feet away, measured in a direct line); The Marquis Road 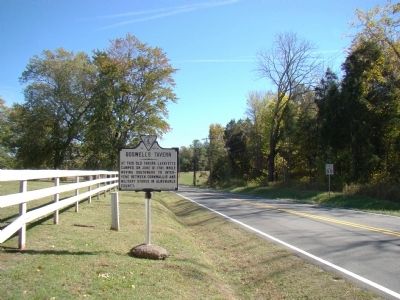 Also see . . .  Boswell's Tavern. “A number of political figures, including Thomas Jefferson, Patrick Henry, and James Madison frequented the tavern. It served as a headquarters for the Marquis de Lafayette in 1781. British colonel Banastre Tarleton captured colonial troops here during his attempt to sieze Jefferson.” (Submitted on October 24, 2010.) 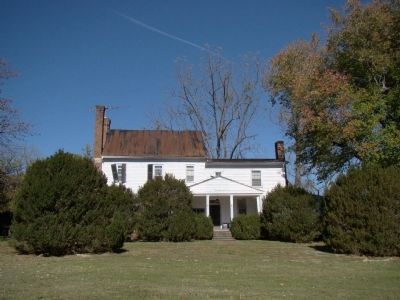