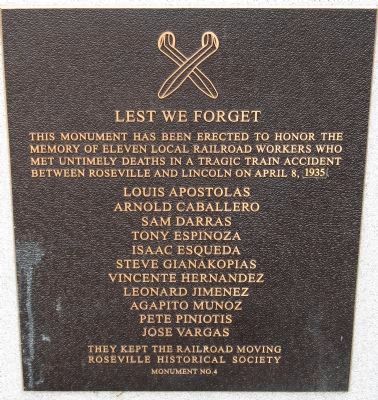 By Syd Whittle, October 21, 2010
1. Lest We Forget Marker
Inscription.
Lest We Forget. . This monument has been erected to honor the memory of eleven local railroad workers who met untimely deaths in a tragic train accident between Roseville and Lincoln on April 8, 1935. . . Louis Apostolas . Arnold Caballero . Sam Darras . Tony Espinoza . Isaac Esqueda . Steve Gianakopias . Vincente Hernandez . Leonard Jimenez . Agapito Munoz . Pete Piniotis . Jose Vargas . .
They kept the railroad moving. . This historical marker was erected by Roseville Historical Society. It is in Roseville in Placer County California

This monument has been erected to honor the memory of eleven local railroad workers who met untimely deaths in a tragic train accident between Roseville and Lincoln on April 8, 1935.


They kept the railroad moving

Location. 38° 45.003′ N, 121° 17.173′ W. Marker is in Roseville, California, in Placer County. Marker is on North Grant Street west of Pacific Street, on the left when traveling west. Marker is located at the Roseville Amtrak Station. Touch for map. Marker is in this post office area: Roseville CA 95678, United States of America. Touch for directions.

Other nearby markers. At least 8 other markers are within walking distance of this marker. The Roseville Methodist Church (about 300 feet away, measured in a direct line); Roseville (about 400 feet away); Roseville's First Hospital 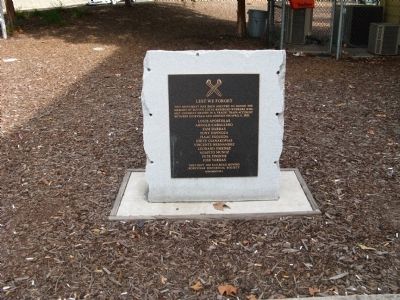 Regarding Lest We Forget. This memorial was placed to honor the memory of the 11 railroad workers who were killed while working on the tracks during a rain storm.

The engineer on a train traveling from Lincoln to Roseville could not see the workers and the train ran into their open rail-car. 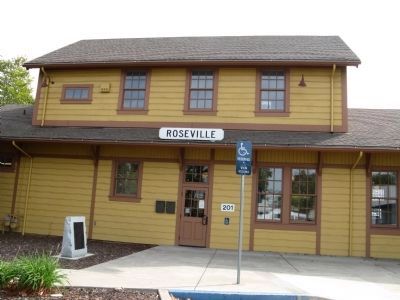