French Settlement on the South Shore 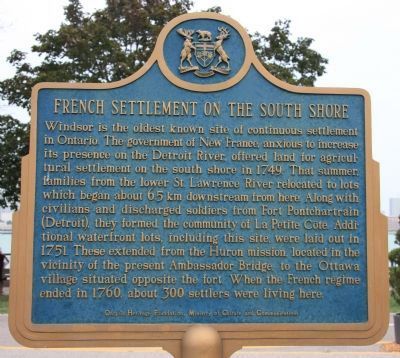 Front - In English
Windsor is the oldest known site of continuous settlement in Ontario. The government of New France, anxious to increase its presence on the Detroit River, offered land agricultural settlement on the south shore in 1749. That summer families from the lower St. Lawrence River relocated to lots which began about 6.5 km downstream from here. Along with civilians and discharged soldiers from Fort Pontchartrain (Detroit), they formed the community of La Petite Cote. Additional waterfront lots, including this site, were laid out in 1751. These extended from the Huron mission located in the vicinity of the present Ambassador Bridge, to the Ottawa village situated opposite the fort. When the French regime ended in 1760, about 300 settlers were living here. 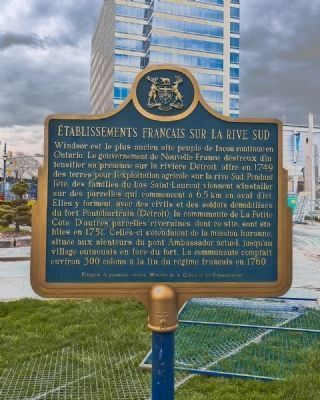 Erected by the Ontario Heritage Foundation, Ministry of Culture and Communications.

Topics. This historical marker is listed in these topic lists: Settlements & Settlers • War, French and Indian. A significant historical year for this entry is 1749.

Location. 42° 19.213′ N, 83° 2.434′ W. Marker is in Windsor, Ontario, in Essex County. Marker is at the intersection of Ouellette Avenue and Viale Udine, on the right when traveling north on Ouellette Avenue. This historical marker is located in the downtown area, in the community's public park, on the Detroit River, directly across the river from downtown Detroit, Michigan. Touch for map. Marker is in this post office area: Windsor ON N9A 6T3, Canada. Touch for directions.

Other nearby markers. At least 8 other markers are within walking distance of this marker. The Rt. Hon. Herb Gray, PC., C.C., Q.C. (here, next to this marker); The Detroit River (about 120 meters away, measured in a direct line); The Great Western Railway 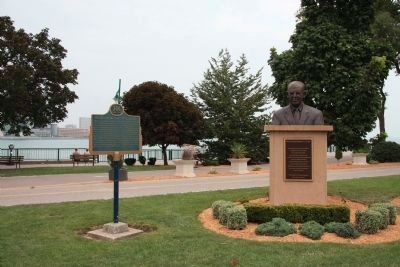 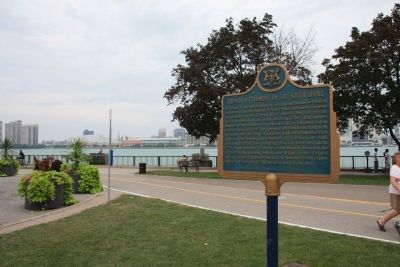 Photographed By Dale K. Benington, August 9, 2010
4. French Settlement on the South Shore Marker
View looking northeast, with the historical marker in the foreground, and in the background the Windsor downtown walkway, and then the Detroit River, and beyond the river, a view of downtown Detroit, Michigan. 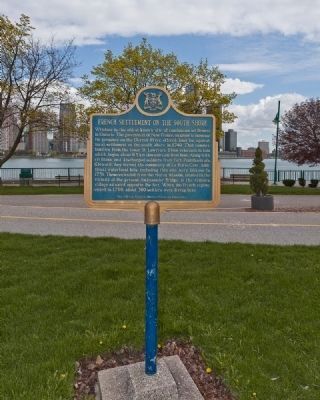 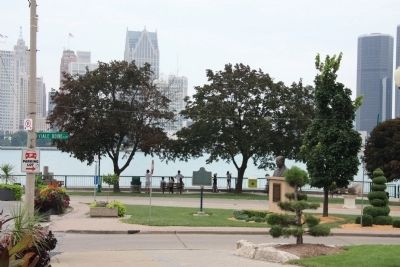