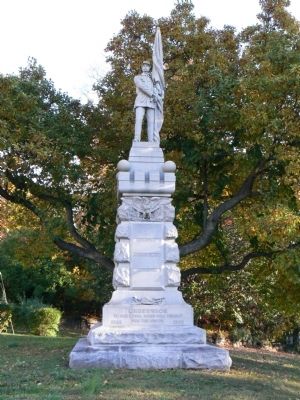 Location. 41° 2.136′ N, 73° 37.337′ W. Marker is in Greenwich, Connecticut, in Fairfield County. Marker is at the intersection of Maple Avenue and East Putnam Avenue (U.S. 1), on the right when traveling north on Maple Avenue. Touch for map. Marker is in this post office area: Greenwich CT 06830, United States of America. Touch for directions.

More about this monument. The monument's south face also lists the battles of Kingston (Ga.), Morris Island (S.C.) and Antietam. The east face lists Appomattox, Gettysburg, Vicksburg and Port Hudson (La.). The north side lists Drury’s Bluff, Petersburg and Deep Run (all in Virginia), and the west side lists New-Berne (N.C.) , Darbytown Road (Va.), Fort Fisher (N.C.) and Fort Gregg (S.C.).
Credits. This page was last revised on June 16, 2016. It was originally submitted on November 1, 2010, by Dave Pelland of Milford, Connecticut. This page has been viewed 890 times since then and 24 times this year. Photo   1. submitted on November 1, 2010, by Dave Pelland of Milford, Connecticut. • Craig Swain was the editor who published this page.
Share this page.