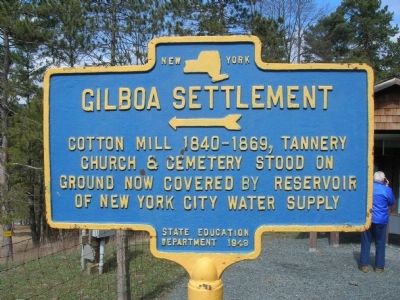 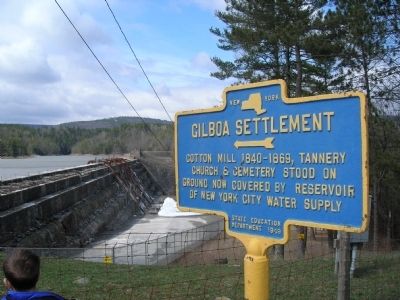 By Howard C. Ohlhous, April 14, 2007
2. Gilboa Settlement Marker
This view shows the Gilboa Dam with the four-48 inch siphon tubes over the top of the dam to release water from the reservoir without cresting the dam.
The Town of Gilboa in Schoharie County, NY was formed in 1848 from regions taken from the Towns of Blenheim and Broome and named after the prominent community of Gilboa in the town. The name "Gilboa" is taken from a location in Israel.

In 1926, The 120-foot high Gilboa Dam was completed on the Schoharie Creek, which is a tributary of the Mohawk River, forming the Schoharie Reservoir. The original settlement of Gilboa was razed and flooded as part of this project that supplied New York City with water. A new settlement was established north of the reservoir.

The 120-foot high concrete and stone brick Gilboa Dam in Schoharie County completed in 1926 that was created to be one of 19 reservoirs that supplies New York City with water. The Gilboa Dam impounds waters of the Schoharie Creek creating the Schoharie Reservoir which consists of a single 6-mile basin, containing 17.6 billion gallons of water at full capacity, making it one of the smaller New York City reservoirs. 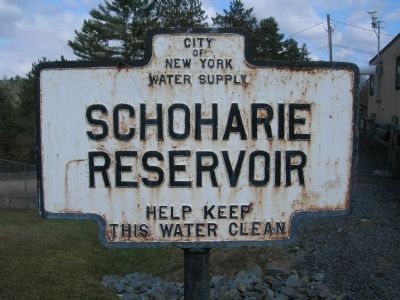 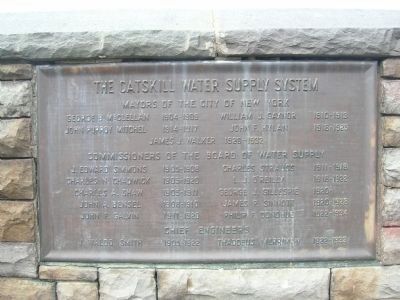 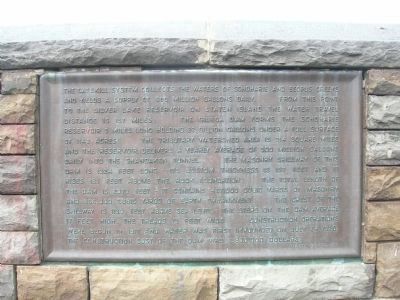 By Howard C. Ohlhous, April 14, 2007
5. The Catskill System
A second plaque at the Gilboa Dam overlook:
The Catskill System collects the waters of Schoharie and Esopus Creeks and yields a supply of 600 million gallons daily. From this point to the Silver Lake reservoir on Staten Island the water travel distance is 157 miles. The Gilboa Dam forms the Schoharie reservoir 5 miles long holding 22 billion gallons under a full surface of 1142 acres. The tributary watershed area is 314 square miles and the reservoir delivers a yearly average of 300 million gallons daily into the Shandaken Tunnel. The masonry spillway of this dam is 1324 feet long - its bottom thickness is 157 feet and it rises 183 feet above the rock foundation. The total length of the dam is 2073 feet - it contains 467,000 cubic yards of masonry and 866,000 cubic yards of earth embankment. The crest o the spillway is 1130 feet above sea level 0 the steps on the dam average 17 feet high. The treads 13 feet wide. Construction operations were begun in 1917 and water was first impounded on July 24, 1926. The construction cost of the dam was 7,800,00 dollars. Tablets erected 1927. 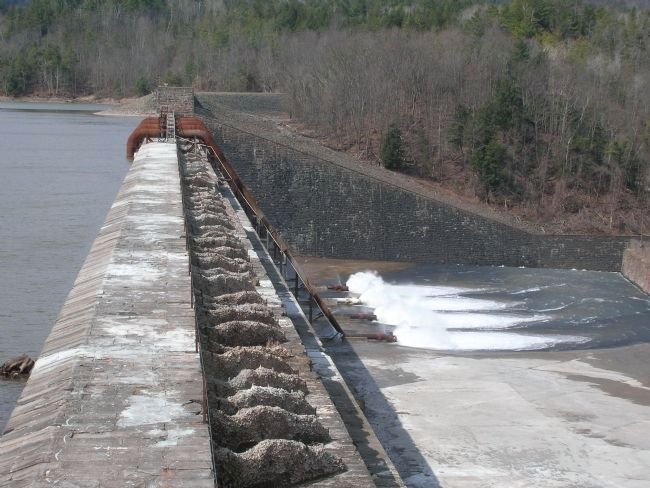