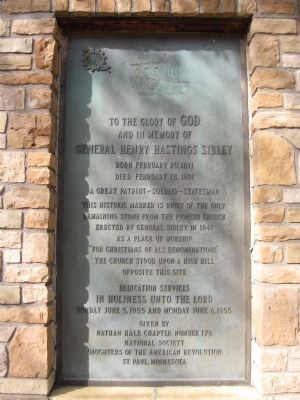 [symbol of the Daughters of the American Revolution; image of the Sibley House]

To the glory of God and in memory of General Henry Hastings Sibley. Born February 20, 1811, died February 18, 1891. A great patriot - soldier - statesman. This historic marker is built of the only remaining stone from the pioneer church erected by General Sibley in 1847 as a place of worship; "for Christians of all denominations." The church stood upon a high hill opposite this site.

Topics and series. This historical marker is listed in this topic list: Churches & Religion. In addition, it is included in the Daughters of the American Revolution (DAR) series list. A significant historical month for this entry is February 1866. 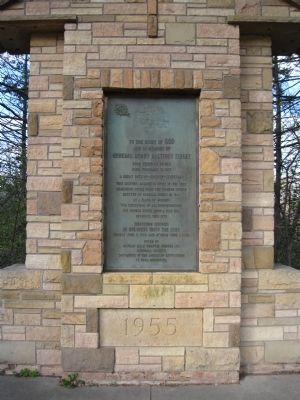 Click or scan to see
this page online
N, 93° 9.961′ W. Marker is in Mendota, Minnesota, in Dakota County. Marker is on 1st Street / Sibley Memorial Highway (State Highway 13) west of D Street, on the right when traveling west. A parking area is located west of the marker. Touch for map. Marker is in this post office area: Mendota MN 55150, United States of America. Touch for directions.

Also see . . .  Minnesota Department of Transportation. Historic Roadside Development Structures Inventory. "The limestone used to construct the marker was obtained from the remains of a non-denominational church that Henry Sibley constructed on a hill across from this site. The limestone was probably quarried locally, perhaps from the same quarry where the stone for the Sibley House was obtained. The limestone in this marker may therefore have been some of the first quarried in Minnesota." (Submitted on November 5, 2010.) 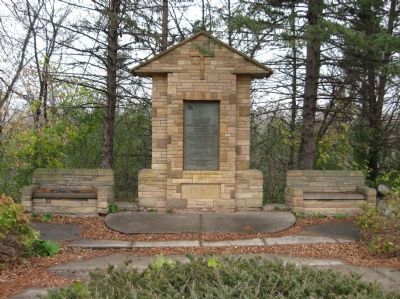 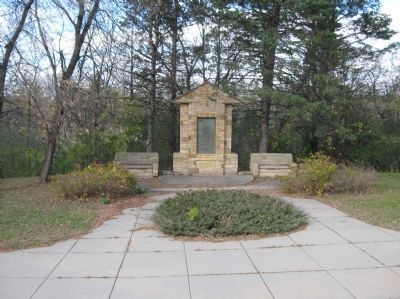