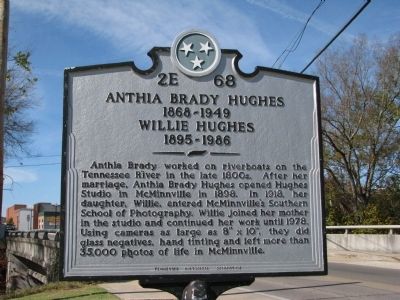 Anthia Brady worked on riverboats on the Tennessee River in the late 1800s. After her marriage, Anthia Brady Hughes opened Hughes Studio in McMinnville in 1898. In 1918, her daughter, Willie, entered McMinnville's Southern School of Photography. Willie joined her mother in the studio and continued her work until 1978. Using cameras as large as 8" x 10", they did glass negatives, hand tinting and left more than 35,000 photos of life in McMinnville.

Topics and series. This historical marker is listed in these topic lists: Industry & Commerce • Notable Places. In addition, it is included in the Tennessee Historical Commission series list. A significant historical year for this entry is 1898.

Location. 35° 40.839′ N, 85° 46.11′ W. Marker is in McMinnville, Tennessee, in Warren County. Marker is at the intersection of E. Main St and Mulberry St, on the right when traveling east on E. Main St. Touch for map. Marker is in this post office area: McMinnville TN 37110, United States of America. Touch for directions.

Other nearby markers. At least 8 other markers are within walking distance of this marker. Carl T. Rowan (about 500 feet away, measured in a 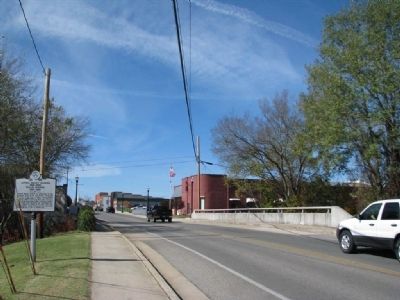